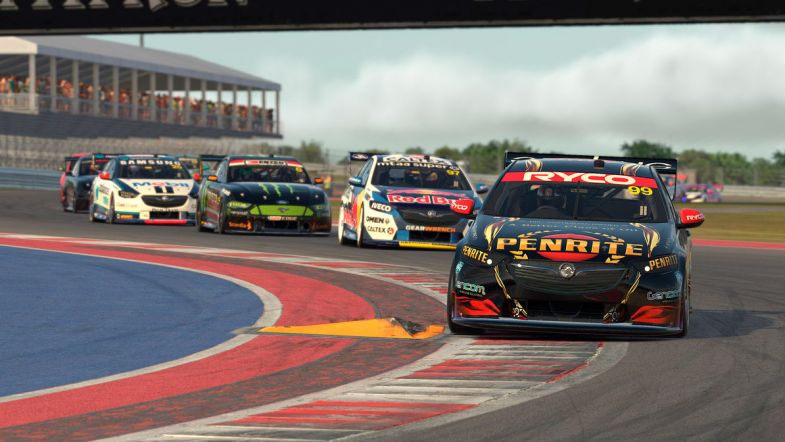 Penrite Racing’s Anton de Pasquale emerged as the round winner in the latest Supercars All Stars Eseries event at the Circuit of the Americas after recording a third victory of the season.

Second in the opening encounter to Red Bull Holden Racing Team’s Shane van Gisbergen and fifth in the second race won by McLaren Formula One driver Lando Norris preceded a lights-to-flag win in Race 3, but only after a final lap clash with van Gisbergen.

It was the second time in a week that the pair collided late in the race, with van Gisbergen profiting from contact at the previous round at Spa-Francorchamps.

This time however, the Kiwi allowed De Pasquale to retain his lead which he held for the duration of the 20-lap encounter from pole position, to claim the victory by a fraction over half a second.

Points leader Scott McLaughlin (DJR Team Penske) endured an up-and-down time in his Ford Mustang. The double Supercars champion claimed two third place finishes, in races one and three respectively, but was involved in a multi-car pile-up at the start of the reversed-grid second race.

Van Gisbergen took pole for the opening race and duly led the way into the first corner from De Pasquale, who had to defend his second place from McLaughlin.

IndyCar star Will Power qualified fourth but lost out to the Tickford Mustang of Lee Holdsworth at Turn 1 before eventually reclaiming the position towards the end of the first lap.

Attempting the undercut in the mandatory pit-stop, van Gisbergen was the first of the leaders to pit, on lap six of 11. De Pasquale responded the next lap, but the positions remained the same, with van Gisbergen leading the Penrite Holden to the flag.

Cameron Waters’ race took a turn for the worse when he was spun around by Norris exiting Turn 10, which earned Norris a drive through penalty. That incident dropped Waters to 21st by the end as van Gisbergen won by 1.1490 seconds.

Super2 regular Josh Fife lined up on pole for the reversed-grid second race alongside the returning Craig Lowndes in the Red Bull Holden.

Fife took the lead into Turn 1 for the first time while Norris dived past Lowndes for second. Further back though, several cars were caught up in an incident before the first corner, with McLaughlin, Fabian Coulthard, Andre Heimgartner, Chris Pither and Garry Jacobson all involved.

Brad Jones Racing’s Todd Hazelwood then forced his way past Fife and into the lead halfway around the opening lap, with Norris also consolidating second before finding a way around Hazelwood for the lead on lap four of 11.

Norris held the lead either side of the compulsory pit-stop, as Hazelwood slipped behind Waters, who benefited from a better starting position after his Race 1 dramas.

Jake Kostecki finished fourth ahead of De Pasquale, who gained crucial ground on van Gisbergen (seventh) and McLaughlin (18th) in the points.

De Pasquale and van Gisbergen started alongside each other for the start of the final race, and the order remained the same throughout the race.

Race 2 winner Norris sent McLaughlin into a half spin exiting Turn 1, but the DJR Team Penske Mustang was able to remain in front.

With two mandatory pit-stops required for the 20-lap race, it was van Gisbergen who pitted first on lap five, with De Pasquale responding one lap later and rejoining in the lead.

Come the second stops, the pit order was reversed but the positions stayed unchanged, until van Gisbergen tried an ambitious move down the inside of De Pasquale at Turn 16 on the final lap.

De Pasquale was spun around but van Gisbergen, keen to avoid a repeat post-race penalty this weekend, allowed De Pasquale to retain his advantage and claim the win.

McLaughlin’s dramas also continued in the final race. The Kiwi ran fourth for the majority of the race but was also looped around late on, when Waters clipped the back of the Penske car at turn 1.

Waters fell behind McLaughlin before the end, giving the latter valuable points in the overall standings with third.