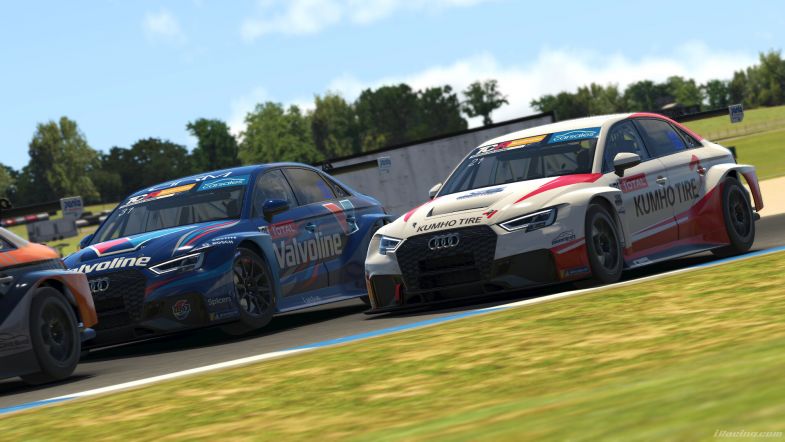 Young stars from the Australian Racing Group have shared the spoils in the seventh round of the ARG eSports Cup, the two races being topped by Harley Haber and Lachlan Mineeff respectively.

Despite both being far too young to have ever raced around Sydney’s now closed Oran Park (knocked down a decade ago for housing development), the sub-20-year-olds showed their ability to adapt as well as experience on the simulator to take commanding wins.

For race one, Haber lead early on thanks to a lightning start as Garth Tander dropped from the front row of the grid to fourth after the first few corners, his mistakes being copied by Jordan Cox who also dropped back from a strong qualifying position.

Haber enjoyed a comfortable lead over Tander and Brett Holdsworth who held on to third place until a mistake entering the pit lane, ending up in the concrete wall which put an end to his strong run.

Tander and Cox came together as Tander left the pit lane, Cox having taken his compulsory stop already. The pair continued their battle throughout the remainder of the race, fighting for third place as former British Touring Car Champion Ash Sutton held on to second place.

Out front, Haber took a commanding victory as Sutton came home a distant second with Tander holding off Cox for third. James Golding was able to make use of an early pit stop to come home fifth in touching distance of the pack in front.

Wildcard entrant Josh Files took pole for race two thanks to his 20th place finish in the opening outing, unable to hold the lead for long as Declan Fraser and Lachlan Mineeff made their way past.

A tough opening lap saw Sutton plummet down the order as Fraser made a mistake in the lead, handing control of the race over to Mineeff.

Files’ race went from bad to worse when he went off at the penultimate corner, rejoining the circuit behind Will Brown but making contact with the reigning TCR Australia champion, elevating Steven Johnson and Chelsea Angelo up to the podium spots.

Chaos ensued on lap five as a majority of the lead pack got caught up in incidents, the biggest names to drop spots were Johnson and Tander who both saw potentially strong results go begging.

Mineeff was able to retain the lead until the flag over Files, Jaden Ransley was able to finish third as Haber completed his charge on from 20th to end up fourth, just ahead of Angelo who ran out of fuel on the way to the flag.

Next week’s races will take place around the famed Silverstone Circuit, home of the British Grand Prix and host of many classic touring car races.