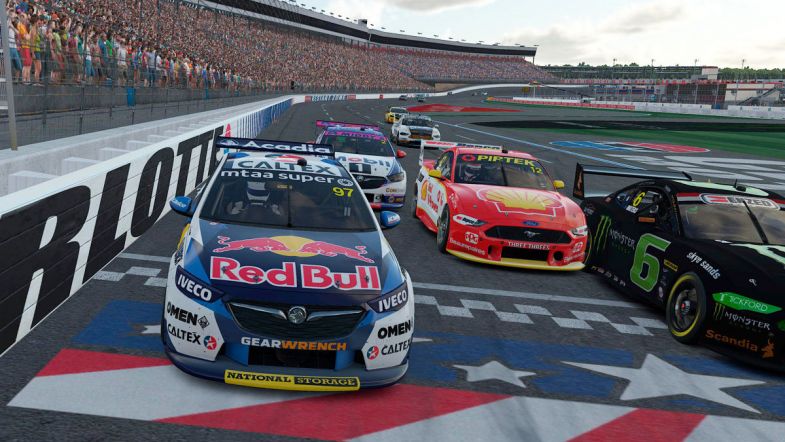 Shane van Gisbergen has pulled off a masterclass in tonight’s speedway-based rounds of the Supercars Eseries, becoming the first driver in the history of the virtual racing category to clean-sweep a round.

Taking the full 300 points available for the round, the Triple Eight driver moved to the Eseries championship lead as his title rival Scott McLaughlin struggled, making use of his fellow Kiwi’s troubles by emerging victorious across the three races.

A pole position start for Anton de Pasquale gave the Erebus driver control over the field when the pace car peeled off for the rolling start, getting the jump over Lando Norris who was slow to react in the Walkinshaw Andretti United entry.

Lap one contact between the Brad Jones Racing car of Jack Smith and series leader Scott McLaughlin dropped the DJR Team Penske driver to the back of the pack, setting the scene for a tough day at the home track for the Penske company.

With close quarters being kept between the top drivers, de Pasquale and Norris were joined by Shane van Gisbergen and Jamie Whincup from Triple Eight as well as the Tickford Racing entries of Jack Le Brocq, Cam Waters and Lee Holdsworth getting themselves in the mix.

Chaz Mostert was able to take the lead from his WAU team-mate Norris on lap 15, two laps before the Formula One star found himself in the fence, taking him out of contention for the victory as the Tickford cars peeled off for their pit stops.Mostert takes lead on lap 15.

van Gisbergen and Mostert came into the lane at the same time, both getting jumped by the Tickford cars of Waters and Le Brocq who were working together until Whincup ranged up behind them, taking the lead just as the yellow flag came out.

Whincup led at the restart as Le Brocq and Waters tried to block the charging van Gisbergen who was making use of fresher tyres. With the race nearing its time certain finish, Le Brocq and Whincup made contact at Turn 3, resulting in the Tickford car finding the wall while Whincup dropped out of the lead battle.

A close fight on the last lap saw van Gisbergen emerge victorious, less than a bonnet’s length ahead of Waters who had enjoyed a push from the Mustang of Fabian Coulthard on the run to the finish line. Coulthard’s team-mate McLaughlin endured a terrible day to finish dead last, losing the series lead to van Gisbergen.

Taking pole for the first of two races at the Daytona International Speedway road course, van Gisbergen got the advantage when the green flag dropped over de Pasquale who was caught napping, having to fight off Mostert and McLaughlin behind.

McLaughlin’s night went from bad to worse when he made a mistake at the back chicane, having to give up the time gained as the field completed the opening lap. His problems were compounded when he was given a tough from Scott Pye at Turn One, the Team 18 car spinning the DJRTP entry down the order.

de Pasquale took his stop on lap four, utilising the undercut to take the effective race lead when van Gisbergen came in on the next lap, filing out behind the Erebus driver and in front of Mostert who won in his class at this year’s 24 Hours of Daytona.

Lap seven saw van Gisbergen retake the lead at the back chicane after slipstreaming de Pasquale, the two stretching out a comfortable lead over Mostert who sat in a lonely third place. Driving aggressively through the chicane, de Pasquale was able to range up to van Gisbergen on the run to the line but he couldn’t get past, allowing the Kiwi to extend his championship lead.

For the final race of the night, van Gisbergen again started from pole thanks to the win in race two, again getting a good run off the line while McLaughlin pulled off one of the saves of the day as he was sent to the inside of Turn 1 out of control, rejoining without any harm being done.

Mostert was able to keep van Gisbergen honest in the opening stint, staying within a second of the leader as Garry Jacobson held down third place in the Matt Stone Racing #35 car. Both he and Mostert pitted on lap 6, giving van Gisbergen breathing room out front.

A tight re-entry for van Gisbergen resulted in him retaining the race lead, being able to hold station in first ahead of Erebus’s David Reynolds, Mostert and Reynolds, eventually skipping away down the road as Reynolds held up the two behind him.

After the second round of pit stops, van Gisbergen still led from Jacobson while Mostert had McLaughlin to keep him company, the duo losing time to Reynolds who was hunting for a podium result. de Pasquale was able to catch up to his team-mate in the closing laps, improving massively on his starting position after he missed the grid and had to start from the pits.

Mostert was able to squeeze past Jacobson on the last lap, leading the battle for second as McLaughlin and de Pasquale applied the blow torch to the MSR machine, trying but ultimately failing to get past as van Gisbergen won the race, completing a clean sweep of the round.

van Gisbergen now sits 64 points ahead of McLaughlin in the Eseries standings, becoming just the second driver to lead the championship with only a handful of rounds yet to run. Next up, classic Formula One circuits Imola and Interlagos feature as the series draws closer to finishing.