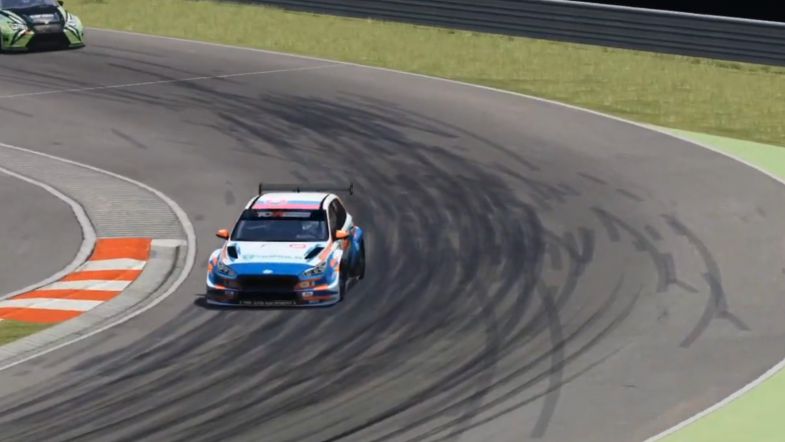 Hyundai drivers dominated the third round of the TCR Europe SIM Racing series at a virtual Hungaroring, with Dániel Nagy taking another win and Mat’o Homola claiming an on-the-road victory in Race 2.

Homola profited from drama in front of him in an action-packed reversed grid race and claimed victory after a late crash between Jimmy Clairet’s Peugeot and Nicolas Baert’s Audi, but was stripped of victory as a result, handing Boldizs a maiden victory.

Nagy again blitzed qualifying to take his third consecutive pole position and duly led off the line ahead of Mat’o Homola’ Hyundai into Turn 1.

Homola’s second place was short-lived however as he was speared off the track at Turn 2 by Niels Langeveld’s Audi, dropping the Slovakian to tenth.

That allowed Gilles Magnus to move into second place in his Comtoyou Racing Audi and the Belgian held onto the runner-up slot comfortably until a pedal issue forced him out on the eighth lap of 13.

Aurélien Comte was the main beneficiary of Magnus’ misfortune, inheriting second place behind Nagy at the flag, fending off the attentions of Langeveld in a drag to the line.

Tamás Tenke made it two Hungarians inside the top four with another solid drive in his Cupra, ahead of Jimmy Clairet and Teddy Clairet in their Peugeot 308TCRs.

Behind the two Clairets came Bence Boldizs and Andrej Studenic, while Viktor Davidovski claimed his best finish of the SIM Racing season so far with ninth.

The drama was saved for the reversed grid encounter as Nagy got caught up in a multi-car pile-up on the exit of Turn 1, which also held up Teddy Clairet, Gianni Morbidelli, Kevin Ceccon and Tenke.

That left pole sitter Baert in a clear lead from the Honda Civic Type R FK8 TCR of Davidovski and Boldizs, with Magnus making quick progress from the back of the grid after his Race 1 woes.

Baert, Davidovski and Boldizs soon became embroiled in a three-way battle for the lead, which soon expanded to a five-car battle as Jimmy Clairet and Homola joined the mix. Boldizs made a daring move around the outside of Davidovski at the final corner for second, but was mis-placed at Turn 1 and subsequently lost the place to Clairet.

Clairet then made the most of a small error from Davidovski on the seventh lap of 13 and grabbed second on the exit of Turn 10. Davidovski tried to fight back, but tagged the back of Clairet at the penultimate turn and then got turned around by Homola.

All the while, Baert’s lead had grown to 1.3s but Clairet was the faster of the two heading into the final two laps. The Peugeot closed onto the back of the Audi on the uphill approach to Turn 4, but Baert closed the door on Clairet, making contact.

Baert speared off into the barriers and finished a lowly seventh, while Homola moved into the lead as Clairet was slowed in the incident.

Boldizs also inherited a position and finished a close second to Homola over the line, which subsequently became the win as Clairet claimed the final step on the virtual podium in third. Magnus completed a great recovery drive to finish fourth, ahead of Briché, Langeveld and Baert.

Despite starting the reversed grid race third, Andreas Bäckman could not make the progress he wanted and finished eighth ahead of Davidovski, while Comte and Gianni Morbidelli completed the top ten.

The next round takes place on June 10th at the virtual version of Paul Ricard.