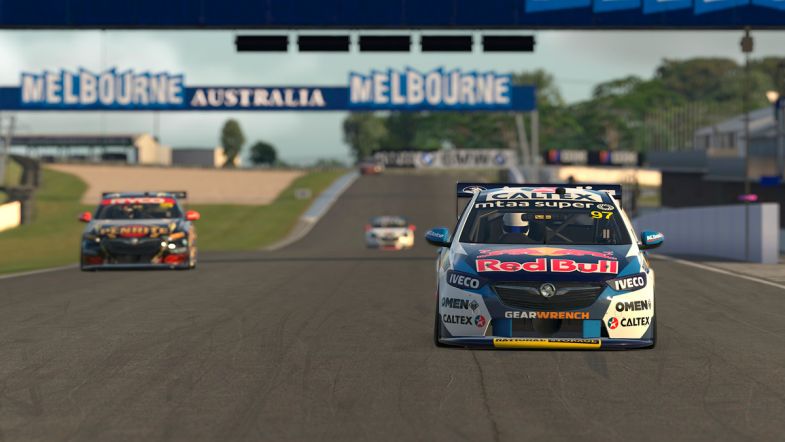 Shane van Gisbergen continued his strong form in the Supercars Eseries with wins at both Phillip Island and Interlagos during the eighth round of the campaign.

The Red Bull Holden driver secured another two wins in three typically chaotic races, whilst Anton De Pasquale also returned to winning ways at the wheel of his Erebus Commodore.

With fans given the chance to choose between Spa and Phillip Island to see which circuit would join Interlagos for Round Eight of the season, the famous Australian venue came out on top and played host to the opening race of the evening.

Wild card driver Fawzan El-Nabi, who earned his place in the event by virtue of winning a special competition offering fans the chance to go up against the Supercars field, produced an impressive performance in qualifying to secure pole position at the wheel of a Ford Mustang.

El-Nabi bogged down when the lights went out however and plummeted down the order, with van Gisbergen getting the jump on the run to turn one and De Pasquale running wide onto the grass as he looked to find a way ahead of the Triple Eight driver; rejoining in the pack going through the Southern Loop without making contact with any of his rivals.

That left a fast-starting Mostert in second from Holdsworth, with David Reynolds getting ahead of De Pasquale at the end of the opening lap.

After a relatively clean opening lap, there was drama on lap two as Fabian Coulthard got out of shape through turn three and collected both Bryce Fullwood and Andre Heimgartner, whilst out front, De Pasquale got ahead of Reynolds and set about chasing down the leading three – with McLaughlin and Cam Waters also getting ahead of Reynolds’ Penrite Racing Holden.

By lap four, De Pasquale had closed onto the rear of Holdsworth and quickly made a move for third place as van Gisbergen struggled to try and break free from Mostert.

McLaughlin has been the first of the front-runners to pit, with Mostert also electing to take his mandatory stop early as he dived in at the end of the fourth lap – a lap before van Gisbergen would head for pit road.

As van Gisbergen exited the pits, Mostert was coming across the line and swept ahead going into turn one to secure the advantage, with De Pasquale then taking his stop and rejoining the pair.

As the final drivers took their mandatory stops, van Gisbergen was able to make a move on Mostert for the the lead into turn one with De Pasquale slotting into third but there was drama behind for McLaughlin when he was tagged by a recovering El-Nabi, dropping the Shell V-Power Ford down outside the top ten and earning the Wild Card driver a drive through penalty.

De Pasquale made a similar move to van Gisbergen on Mostert to move into second place and quickly started to reel in the leader, posting the fastest lap as he closed in on his rival.

By the start of the final lap, De Pasquale had closed onto the rear of van Gisbergen’s Red Bull Holden, forcing van Gisbergen to defend to the inside at turn four. De Pasquale then made a slight error to slip slightly back from his rival but was still able to make another move at turn ten before being forced to settle for second spot as van Gisbergen made it four wins in a row.

Having started strongly, Mostert had to settle for third place having dropped away from the top two, with Lee Holdsworth, Cam Waters and Will Davison rounding out the top six. McLaughlin would recover to ninth by the finish following his mid-race drama.

De Pasquale had secured pole for the opening race of two that then followed at the home of the Brazilian Grand Prix as he beat El-Nabi to pole, with van Gisbergen slotting into third ahead of Mostert, McLaughlin and Heimgartner.

De Pasquale made the best start when the lights went out to retain the lead on the run to turn one, with van Gisbergen getting the jump on El-Nabi having chopped across the front of the wild card driver – making contact with the wall in the process. Contact further back saw McLaughlin in trouble too, as he looped round at turn one after a touch from Mostert and dropped down the order as his tough evening continued.

As De Pasquale made his move to break away at the front, El-Nabi put van Gisbergen under huge pressure and made a fine move for second place, with van Gisbergen diving into the pits at the end of the opening lap for an early start that dropped him down outside the top 20.

Showing his pace, El-Nabi closed onto the rear of De Pasquale and stuck his nose down the inside into turn eight on the fourth lap before pitting at the end of the lap in an attempt to undercut the leader – forcing De Pasquale to continue when the leader was also looking to make a stop.

De Pasquale came in a lap later and rejoined just ahead of El-Nabi, who lost time on his out lap behind van Gisbergen and dropped back from the de-facto leader.

As others pitted, De Pasquale and El-Nabi cycled back to the front but the gap between the two would remain relatively static with the Erebus man eventually crossing the line just over two seconds clear of the Wild Card to secure the race win.

Despite running most of the race on his second set of tyres, van Gisbergen recovered well to finish in third spot with Cam Waters, Fabian Couthard and Lee Holdsworth completing the top six.

After their contact on lap one, Mostert – who served a drive-through penalty – and McLaughlin would benefit from a late stop and tyres at the end of the race to both secure a top ten finish.

The final race of the evening would see the field reversed for a longer race around Interlagos featuring two mandatory stops, with James Courtney leading the field into turn one of the first time.

Courtney would briefly lose the on the run to turn four but was then tipped into a spin that saw him come back onto the circuit in front of the field, collecting a number of cars and triggering a safety car period.

It left Heimgartner leading the field from Jack Smith and David Reynolds, with earlier winners van Gisbergen and De Pasquale able to avoid the early drama to run inside the top 20.

With the race still under caution, the majority of the field too the decision to dive into the pits for the first time, with the action resuming on lap four. Having not pitted, Heimgartner led the way from Rick Kelly and Jake Kostecki, with Smith and Fullwood in trouble in the pack as they were tipped into spins.

Strategy would then start to come into the equation, with De Pasquale taking his second stop early – leaving him with a long final stint – whilst Heimgartner continued out front without pitting. McLaughlin meanwhile was running in fourth as the best of those drivers to have made a single stop.

McLaughlin cycled to the front ahead of Mostert and van Gisbergen as the final drivers made their first stops, with Waters, Zane Goddard and Will Davison holding the top six places as the race reached the half-way stage. James Golding at this stage was the best placed driver to have completed their stops, running in P12 ahead of Todd Hazelwood and De Pasquale.

McLaughlin and Mostert then made their second stops and rejoined behind Golding, leaving van Gisbergen to lead from Davison and Tyler Everingham, with the points leader then pitting at the end of the 13th lap.

Golding had been unable to keep McLaughlin at bay for long and it was the current series champion who moved into the lead as a result when van Gisbergen stopped, with Mostert briefly jumping up to second before the Red Bull Holden swept back through into second on fresh tyres.

As the laps ticked down, van Gisbergen closed in on McLaughlin with the pair going side-by-side through the Senna S and down to turn four on lap 17 before van Gisbergen could make a move stick to secure the lead.

With the race running to time, van Gisbergen was able to secure a second win of the night to extend his championship advantage with McLaughlin securing second spot and Mostert rounding out the podium.

Golding’s strategy would see him rewarded with fourth, with Waters and De Pasquale rounding out the top six places.

Van Gisbergen now leads by 146 points by virtue of the round win ahead of next week’s round, which includes a race on the Michigan oval before the drivers can choose from further races at Michigan, or at Le Mans, Road America or Laguna Seca.