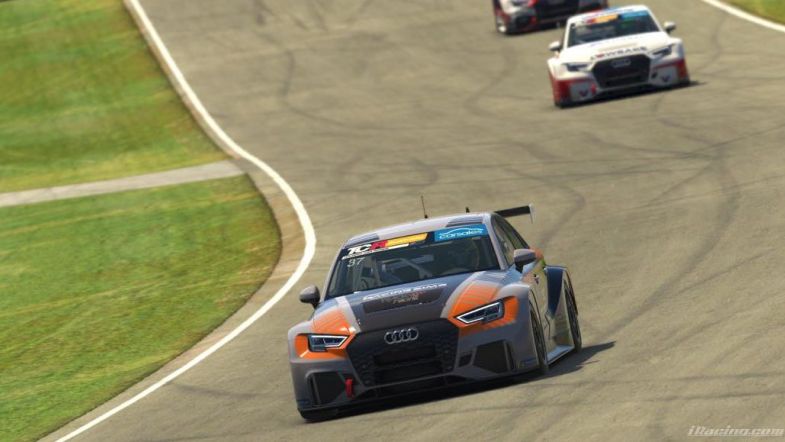 The young combination of Josh Files and Cooper Webster have completed the inaugural ARG eSports Cup championship with a race win in the two-hour endurance race at Mount Panorama while it went down to the wire for the title to be decided, in favour of New Zealander Jaden Ransley.

Ransley becomes the first ARG eSports Cup champion in his first year of TCR Racing with Track Tec Racing, the all-Kiwi outfit coming out on top after title favourite Harley Haber had his car caught up in incidents throughout the race.

Dylan O’Keeffe led the field up Mountain Straight in his Garry Rogers Motorsport entry to kick off the two hour race as the Nathan Morcom/Chaz Mostert entry spun at Hell Corner, dropping the 2016 Bathurst 6 Hour winners down the order.

Championship leader Harley Haber moved to the front of the pack with under 10 minutes run, bringing British ace Ash Sutton with him to demote O’Keeffe back to third.

The battle between the top three became four with Jaden Ransley getting in to the fight, the lead pack getting a margin over the chasing field as the 20 minute mark passed.

A fight of the young guns got underway for seventh place with Thomas Randle having to defend from James Golding but losing a place to the Garry Rogers Motorsport driver,

Sutton and Haber started to get the elbows out with just over half an hour run, making contact coming into the Chase with Sutton choosing to come in to the pits from the lead which handed control of the race over to Haber. Jake Blackhall jumped behind the wheel of Sutton’s car in clear air, able to smash out quick laps.

Haber, O’Keeffe and Ransley all came in to the pits on the next tour, followed by a majority of the field, the former pair electing to take on two new tyres in their stop which meant they came out on track well ahead of Blackhall who had been jumped by Ransley.

Three-time Bathurst 1000 winner Garth Tander was lucky to mostly get away with a decent crash at the Chase aboard the #75 entry, getting loose on entry and being unable to pull the car up before it nudged the concrete wall, dropped him from seventh to outside the top ten.

A three-way clash between championship contenders O’Keeffe, Ransley and Haber saw the former drivers drop spots, hitting the fence despite being the innocent bystander as Haber dropped a spot behind Josh Files.

For his role in the accident, Haber was given a pit lane penalty and served it as the race closed up on the halfway mark, coming out behind Super3 champion Broc Feeney.

The race’s first safety car was called out on lap 22, just over an hour left to run as the pit lane closed as the field bunched up behind the #89 of Riley Preston/Jayden Willmington, Blackhall in second with Golding, Feeney, and Haber completing the top five.

With the pit lane open, Preston had to jump out of the lead car to hand over to Willmington as the rest of the pack followed him in. As the order sorted itself out before the green flag, Brett Holdsworth took the lead with TCR Australia champion Will Brown sitting behind.

Harley Haber’s championship leading car was taken out of the race as his co-driver Fawzan El-Nabi got caught up in crashes at McPhillamy Park, putting the #21 out of contention while Dylan O’Keeffe’s #33 sat in second, driven by Jackson Souslin Hawlow.

Cooper Webster inherited the lead in the #199 entry with Souslin Harlow sitting behind, both being hunted down by Supercars Eseries leader Shane van Gisbergen who teamed up with Triple Eight Supercars co-driver Garth Tander for the night, recoverig well after the earlier incident.

Sutton’s title hopes took a blow when co-driver Blackhall got caught up in an incident heading towards Murrays Corner, dropping outside the top 20 which left the pair with no choice but to hand the controls back over to Sutton to finish the race.

Pit lane started to become the busiest stretch of road with just over half an hour left in the championship with the #33 of Souslin Harlow hitting the pits first with Webster, van Gisbergen and Andre Heimgarter (driving Ransley’s #47) coming in.

Just as the leaders left the pit lane, a second safety car was depolyed, again compressing the field. Webster assumed the lead over Souslin Harlow, van Gisbergen, Ed Williams and Heimgartner with the fifth place for the Kiwi #47 car provisionally enough to give Ransley the championship win with Haber/El-Nabi outside the top 30.

The green flag waved for the last time with under 20 minutes left to go, Webster leading the field to the line as Souslin Harlow applied the pressure while Williams and Heimgartner got past van Gisbergen, putting the Triple Eight driver one spot in front of his countryman and Supercars champion, Scott McLaughlin.

Webster had to relinquish the lead as Souslin Hawlow went hard on cold tyres with Heimgarter jumping on to the podium as well thanks to a pass on Williams, allowing the DJR Team Penske engineer to fight off van Gisbergen behind whose mirrors were being filled yet again with McLaughlin’s car.

Despite the race having passed the 100 minute mark, Webster was able to put in the fastest lap of the night so far while chasing the back of Souslin Harlow, the two going door-to-door through the closing laps while still getting a margin over Heimgartner in third.

Swapping places every lap until the flag, Webster made an assertive dive into Hell Corner to take the lead on the fonal lap, getting a couple of car lengths over his sim racing team-mate Souslin Harlow who was lucky to escape contact at the Dipper.

With a healthy margin, Webster crossed the line to win with Josh Files ahead of Souslin Harlow/O’Keeffe as McLaughlin stole third from Heimgartner/Ransley coming to the line.

With the El-Nabi/Haber car finishing 18th and Ransley in fourth, the result was enough to give Track Tek Racing driver Ransley the ARG eSports Cup title by just seven points over Haber. O’Keeffe finished third in the standings with Jordan Cox and Ash Sutton rounding out the top five for the championship.