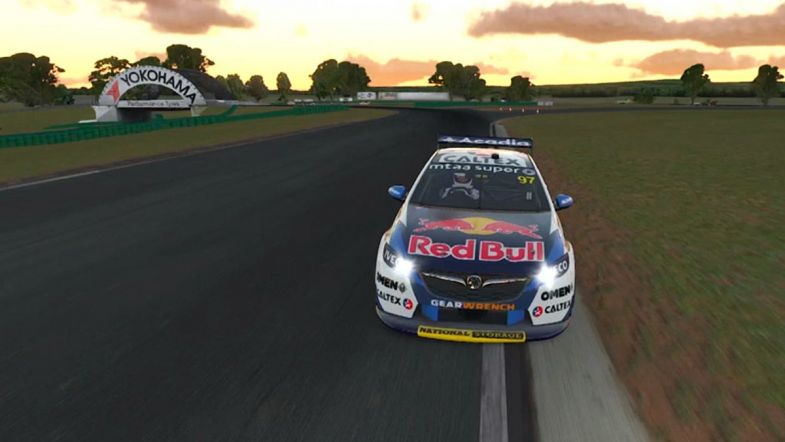 Former Supercars Championship winner Shane van Gisbergen has taken out the inaugural Supercars All-Stars Eseries title after a race win and strong finish in the final outing of the virtual season.

The Triple Eight driver led by 78 points over Scott McLaughlin coming in to the round but was able to outperform his fellow New Zealander, taking a race win in the first race of the night just missing out on a podium finish to clinch the title off the back of finishing second in the real world series for the last two seasons.

Race one was held at the now defunct and demolished Oran Park Raceway in Sydney, a circuit where van Gisbergen made his Supercars debut in 2007 for Team Kiwi Racing, taking pole position for the first race of the night.

van Gisbergen led the field from pole into the Turn 1 kink on the first lap as chaos ensued behind him on the opening lap, wildcard Harley Haber getting turned around at Turn 2 while championship contender Scott McLaughlin just managed to squeeze the #17 DJR Team Penske car past unscathed.

Series leader van Gisbergen held on to the race lead with Erebus Motorsport’s Anton de Pasquale and his Enduro Cup co-driver Brodie Kostecki in the podium places, dragging McLaughlin in fourth with them as they stretched a lead over the field behind.

Coming in to the pits on lap 7, McLaughlin was the first car to stop with van Gisbergen following suit on the next lap, allowing de Pasquale to take control of the race. The fresh air for de Pasquale didn’t yield an advantage, coming out only just ahead of McLaughlin and with a large gap ahead to van Gisbergen.

A quick stop for Kostecki saw him drop back between de Pasquale and McLaughlin, fighting off the DJR Team Penske car on cold tyres but challenging the #99 Erebus machine, all of which allowed van Gisbergen to extend his lead more and more each lap.

Leader van Gisbergen was lucky not to rear-end Jack Smith on his in-lap to the pits as the Brad Jones Racing driver had a clumsy error halfway around the lap, also compromising McLaughlin as he exited the lane which only allowed van Gisbergen to get a bigger margin.

A short second stop for de Pasquale meant he and van Gisbergen went door-to-door on pit exit, rubbing panels on the entry to Turn 1 with the Kiwi taking the lead again into Turn 2 as their battle resumed, both winding up ahead of Kostecki when he took his final stop.

Following on from the form of the series so far, de Pasquale applied the pressure to the back of van Gisbergen in the closing laps of the race, getting onto the back of the Triple Eight machine but found himself unable to get by the 2016 series champion, allowing van Gisbergen to take another win and stretch out his championship lead.

Wildcards Brodie Kostecki and Harley Haber locked out the front row for the final race of the Eseries season at Bathurst with championship leader van Gisbergen starting fourth and McLaughlin in seventh.

Haber was able to grab the lead into Hell Corner, taking control of the first lap ahead of Kostecki as de Pasquale and van Gisbergen fell into line behind. A hard crash between Will Davison and Bryce Fullwood caused a pile of damage further back in the pack at Griffin’s Bend, taking those cars out of the running early.

Kostecki tried to make an undercut work by taking his first stop on lap 3, coming onto the track with clear air as Haber and de Pasquale came into the lane on the next lap to try and negate Kostecki’s strategy. Haber filed out of the lane just behind the #56, trying to get by at Griffin’s Bend but he was unable to pass, leaving himself vulnerable to de Pasquale behind.

McLaughlin’s championship charge all but came to an end when he tried too hard to gain time coming into the pits, ending up sideways into the entry tyre wall and just managing to get into the lane, dropping multiple seconds in the process.

A pass for the lead by Haber on Kostecki saw the #21 car lock up into Turn 2, running into the doors of Kostecki’s car which pushed the #56 wide, dropping two places behind de Pasquale and then van Gisbergen when the championship leader took his first pit stop of the night.

As the second round of stops filtered through and were completed, Haber retained the lead while de Pasquale was locked in a heated battle with van Gisbergen, resulting in contact between the pair which spun the Erebus car at Forrest Elbow.

While van Gisbergen waited for de Pasquale to rejoin the track, he lost a handful of spots to Kostecki and Chaz Mostert in the Walkinshaw Andretti United machine, having to settle for fifth behind de Pasquale as McLaughlin limped home down the order after taking extensive damage in the final lap.

Haber’s win made up for Thursday night last week where he lost the ARG eSports Cup title as Kostecki took the round win thanks to podiums in both races for the night. van Gisbergen won the title thanks to his own consistency as well as issues for McLaughlin who still leads the real world championship which will resume on June 27 at Sydney Motorsport Park.