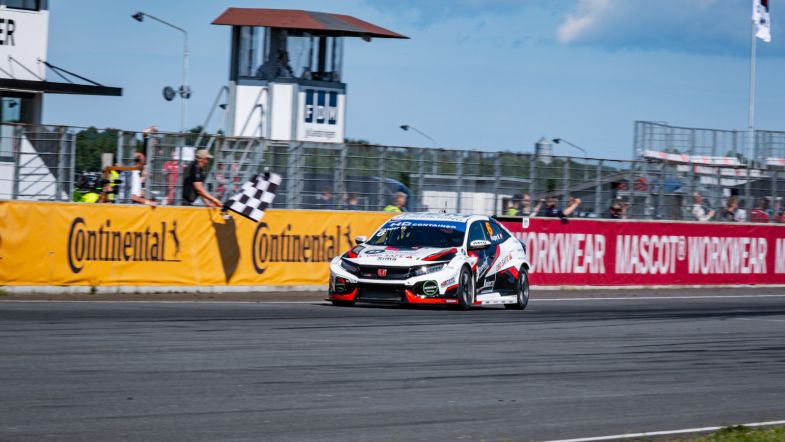 Kasper H. Jensen made it two wins from three after the Honda driver took victory in the third race of the TCR Denmark series season opener.

Jensen, who also took pole position and won the first race of the weekend, beat Nicolai Sylvest and Jacob Mathiassen to the win as he enjoyed a fine start to the campaign at Jyllandsringen.

The Massive Motorsport driver led the race as the field headed down to the first corner, and although Sylvest never had the leader out of sight, Jensen driver kept his cools and was first to see the chequered flag.

Mathiassen took his Insight Racing Alfa Romeo Giulietta TCR home in third position capped a strong fight back across race day, considering he started the first race from the back of the grid.

In fourth, Martin Andersen finished ahead of Michael Markussen in one of the two remaining Peugeot 308TCR after an intense battle that saw Michelle Gatting and Johnny Vejlebo crashing out in two separate incidents.

Whilst Sylvest finished in second position, team-mate Jan Magnussen had technical issues in his VW Golf GTI TCR and was the last car to finish the race.

Kim Lund Johansen suffered a broken damper having had a come-together with Jonas Lindhardt in the second race, which led him to pull out of the race after a few hundred metres.

The next race in TCR Denmark is scheduled for September 5-6th.