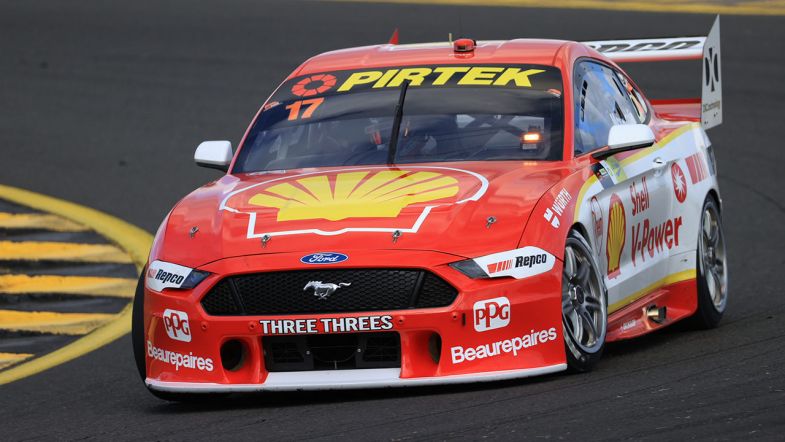 A break of 118 days since the last Supercars Championship race hasn’t had a major affect on the results as championship leader Scott McLaughlin converted a pole position to race victory in the first race since the opening round in Adelaide.

The DJR Team Penske driver didn’t have it all his own way, being harassed throughout the race by his old adversary Shane van Gisbergen, the Triple Eight driver keeping his Kiwi compatriot honest until the very last corner of the Sydney Motorsport Park circuit.

Both McLaughlin and van Gisbergen bogged down off the line but it was the defending champion who got the edge over the Triple Eight car, McLaughlin taking the lead into the opening corners and proceeding to get a gap over the opening tour.

As McLaughlin bolted down the road, van Gisbergen was able to extend a small lead over his Triple Eight team-mate Jamie Whincup, fending off Chaz Mostert’s Walkinshaw Andretti United car but acting as the cork in the bottle as a train formed behind the duo for the last step on the podium.

The gap between the lead cars started to get smalled late in the first phase of the race as McLaughlin’s tyres started to hurt while van Gisbergen had nursed his tyres through the stint, providing more consistent pace before the first round of pit stops.

Whincup came in from third place on lap 15 as the first of the leading pack in for his compulsory stop, taking on four tyres and ending up just behind the Tickford Racing car of Cam Waters on track, losing position after holding back the pack earlier in the race.

van Gisbergen was able to get right on the tail of McLaughlin on lap 15, triggering the leader to come in for his pit stop of four tyres. A slow stop for the #17 meant he only just came out ahead of Waters, losing net time to van Gisbergen as the #97 stayed out for a few more laps.

Finally coming in on lap 18, van Gisbergen hit the pit lane for his only stop of the day, copying McLaughlin’s strategy of four tyres but a slow change on the left front meant he dropped to effective fifth on the road behind McLaughlin, Waters, Whincup and Lee Holdsworth.

On fresher rubber, van Gisbergen made short work of Holdsworth while Whincup was busy battling with Waters, resulting in the #6 Tickford car losing spots to both Triple Eight machines on the main straight.

With Whincup stepping aside to let van Gisbergen through, the Kiwi had his sights set on McLaughlin in the lead some three seconds down the road, slowly chipping away at the DJR Team Penske Mustang in the final ten laps.

Less than a car length split the top two drivers with only a handful of laps to run, van Gisbergen getting the nose of his Commodore under the rear wing of McLaughlin’s Mustang and keeping the pressure up until the very last lap.

Despite being chased across the road through the final lap, McLaughlin was able to hold on for his second victory of the season, less than two-tenths of a second ahead of van Gisbergen who had to settle for second.

Whincup was able to recover and come home third, edging out Mostert while they both came home over ten seconds clear of Nick Percat in fifth for Brad Jones Racing. Waters and Holdsworth finished sixth and seventh for Tickford while Anton de Pasquale, Mark Winterbottom and Fabian Coulthard rounded out the top ten.

Tomorrow’s action will kick off at 1035 local time with qualifying for the two races of the day, the sessions running for 15 minutes each with a five minute break in between. Sunday’s first race will go green at 1215 while the closing race of the round gets underway at 1435 Sydney time.