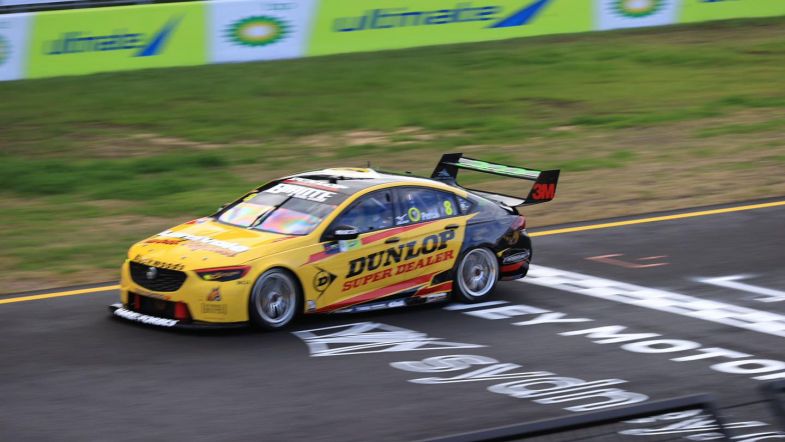 Percat started the 32-lap encounter from sixth on the grid but made a blistering start to run second early on.

He continued his pace either side of the mandatory pit-stop and finally got past Whincup in an assertive move with just over ten laps to go.

From pole, Whincup led away at the start, while Saturday runner-up Shane van Gisbergen slipped down to fifth behind the fast-starting Percat, Cam Waters (Tickford Racing) and race one winner Scott McLaughlin (DJR Penske).

An aggressive tyre strategy from Percat allowed the South Australian to slip up the inside of Waters, with the BJR Holden’s early advantage enough to also grab second from McLaughlin at Turn 5 on lap six.

New pit-stop rules brought into the weekend meant that only four mechanics are allowed to take part in wheel changes, which resulted in varying strategies during the stops.

Teams either elected to change all four tyres – estimated to cost around 10 seconds – or just two – about half the time. BJR, having played it safe in the opening race, used the four new tyres available early in the race to their advantage, with the likes of Van Gisbergen suffering.

Out front, Whincup held a 1.2 second lead over Percat before the first cars made their stops, Bryce Fullwood in the Andretti Walkinshaw Holden pulling in on the ninth lap.

That was whittled down to a car length by the time Percat came in at the end of lap 15.

Whincup made his stop a lap later, preventing the attempted undercut from BJR.

That didn’t stop Percat from fixing his Holden to the back of Whincup and Whincup was unable to bridge any sort of gap as a result.

Percat, with one fresher tyre on his car than Whincup following the pit-stops, made the most of a slight gap on the inside of turn four to snatch the lead with a late lunge with 11 laps remaining.

From then on, Percat maintained his margin over Whincup to take the flag.

Behind Whincup in third came points leader McLaughlin who ran a different kind of race to Saturday in his DJR Team Penske Ford Mustang.

Having started the opening race aggressively and using the maximum out of his rubber, the two-time champion took things more conservatively before picking his way past Chaz Mostert (Walkinshaw Andretti) and Waters.

Mostert and Waters had been embroiled in an epic battle for the final podium spot, but left themselves susceptible to the charging McLaughlin with three laps remaining.

McLaughlin got by Mostert at the final corner before grabbing third from Waters at turn six, despite some contact. The contact allowed Mostert to slide by to claim fourth by the finish.

Reynolds also made it through for fifth, while Waters had to make do with sixth.