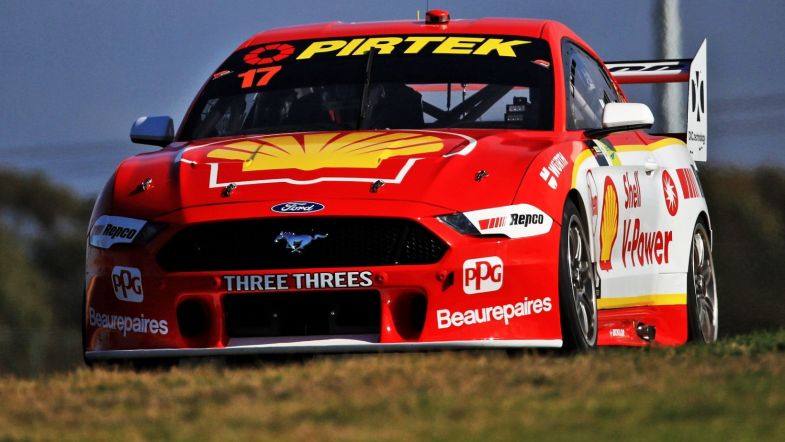 DJR Team Penske’s Scott McLaughlin claimed his third Supercars Championship win out of five races in the final race of the weekend at Sydney Motorsport Park, as Lee Holdsworth finished a superb second.

Tyre strategy again played an important role in the outcome of the race, with McLaughlin and Holdsworth each changing four tyres, with latter running the longest of the field in the opening stint.

In contrast, the Triple Eight Holdens of Jamie Whincup and Shane van Gisbergen elected to change two tyres on the loaded right-hand side and consequently did not challenge for victory, with Whincup a distant third and van Gisbergen sixth.

McLaughlin fended off Whincup in qualifying to take pole by just nine-hundredths of a second and the pair were not that much further split off the start either, McLaughlin assuming the inside line at Turn 2 to consolidate his lead.

Much like Saturday’s opening encounter, McLaughlin leapt into a one-second lead by the end of the first lap, which quickly became a stable three-and-a-half second margin over Whincup.

The big mover in the opening stint was Brad Jones Racing’s Todd Hazelwood who made early ground from fifth on the grid to squeeze past the Tickford Mustang of Lee Holdsworth.

Hazelwood then made inroads into the Triple Eight Holdens ahead and dived past van Gisbergen for third with a decisive move a Turn 3.

Whincup was the first of the leading runners to make his stop – on lap 14 of 322 – but only took on two new tyres like team-mate van Gisbergen. McLaughlin, keen to avoid a potential undercut, pitted the following lap but changed all four tyres, reducing the advantage over Whincup but leaving his Mustang in far better shape for the second stint.

Hazelwood and Holdsworth stayed out, with the former’s charge coming to somewhat of a premature end when the BJR driver rejoined in a net 10th place following the stops.

That was due in part to Holdsworth being the only driver among the leaders to have started the final race with two new sets of tyres. Fresh rubber for the remainder of the race now fitted, Holdsworth made light work of Hazelwood for eighth at Turn 8.

The Tickford Mustang, which stopped on lap 16, then came to life and quickly got by James Courtney, Percat and Waters.

Holdsworth then picked off van Gisbergen for fourth and then Reynolds for third on the same lap, before setting off after Whincup.

Such was the pace of the Mustang, the move on Whincup was a mere formality and it was now a question of whether Holdsworth could haul in McLaughlin for the win.

Alas, McLaughlin had also made the most of four fresher tyres at his pit-stop and held on to beat Holdsworth to the line by just over one-and-a-half seconds, with Whincup a further ten seconds in arrears

Just off the podium was Reynolds, who beat Winterbottom’s Team 18 Holden while van Gisbergen narrowly fended off the second Erebus Racing car of de Pasquale.

Having lamented a Race 2 setup change which “didn’t work”, Waters endured more disappointment in the final encounter despite being bullish about his chances pre-race.

The Tickford driver complained early on about a handling issue and never fully recovered from slight contact from Percat, which dropped him behind Reynolds, Fullwood and Fabian Coulthard. He eventually finished 11th.

Another to suffer a miserable race was Walkinshaw Andretti’s Chaz Mostert. Qualifying a dismal 14th, Mostert lost four places at the start and could not make any significant ground during the race, ultimately finishing 16th.