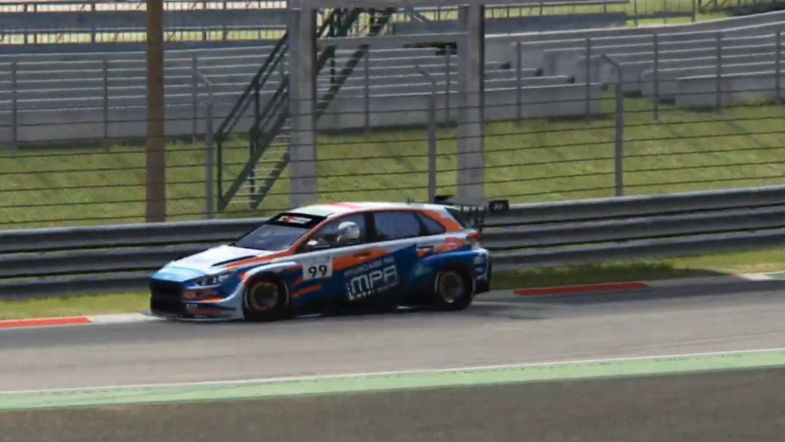 BRC Racing’s Dániel Nagy moved one step closer to the TCR Europe SIM Racing Series title with his sixth win of the season in race two.

Mikel Azcona inherited victory in the opening encounter which Nagy utterly dominated, but a loss of internet connection while approaching the chequered flag denied the Hungarian what would have been a comfortable double win.

Nagy had yet again been the man to beat in qualifying, topping the times for the five race meeting in a row and duly converted off the line into an early lead, beating countryman Bence Boldizs.

Recently-announced WTCR driver Magnus held third off the line but quickly hounded the back of Boldizs on the approach to the Ascari chicane but tapped the back of the Hungarian’s Cupra, dropping Boldizs down the order.

Magnus, slowed in the incident, was then passed down the back straight by Azcona’s Cupra and the Hyundai of Luca Filippi, although Magnus did get back ahead of Filippi after the Italian spun at the second chicane on the third lap of 10.

While Magnus and Azcona duked it out feverishly over third place, Nagy had opened up an almost six second advantage over Teddy Clairet’s Peugeot.

Showing better pace around the final sector of the lap, Magnus harried the back of Azcona and executed a superb switchback move around the outside of Ascari.

Azcona retaliated and perfected a superb switchback move exiting the final corner with the pair going side-by-side down the main straight. Magnus eventually got by for good with another around the outside move, this time at the second chicane.

Magnus, now clear of Azcona set his sights on Teddy Clairet and latched onto the back of the Peugeot heading into the closing stages. Magnus briefly got ahead at Ascari but as the pair went wide, Azcona joined the fray on the way to the final turn.

All three drivers went side-by-side, but Magnus tagged the back of Clairet, tipping the Frenchman into a half spin and allowing Azcona through to second.

Nagy won on the road but appeared to lose internet connection immediately after the flag, leading to the Hungarian slipping out of the unofficial points to 13th. Azcona inherited the “win” despite finishing a clear ten seconds in arrears.

Nicolas Baert’s Audi was classified third ahead of Teddy Clairet, with Viktor Davidovski finishing ahead of Filippi, Moura, Julien Briché.

Jimmy Clairet was ninth, with Boldizs, Lewis Kent and Abdul Al-Khelaifi rounding out the points places.

Al-Khelaifi led race two from pole position, with Kent following the Cupra into the first chicane in his Essex and Kent Hyundai i30 N TCR.

The British driver then surged into the lead around the outside of the second chicane while Briché held third over Boldizs.

Nagy, who was demoted to the rear of the grid, made swift progress and ended the first lap seventh.

Briché, Boldizs and Baert battled valiantly for the final podium position, with the trio joined by Nagy and Jimmy Clairet. Baert and Boldizs inevitably got caught up at the exit of the first chicane, allowing Nagy through to fourth.

Nagy breezed past Baert on the run down to the final corner for third, but the Belgian fought back before eventually giving way to the points leading Hyundai at the first corner.

Baert was then unceremoniously dumped out of fourth by Filippi on exit.

Nagy, clearly the fastest TCR Europe SIM Racing driver in the field, made easy work of Kent at the first chicane at half-distance, with Kent tumbling down the order after a botched retaliation at the second corner.

Al-Khelaifi’s tenure at the top of the standings then came to an end when Nagy completed his charge to the front with an assertive move at Ascari.

Nagy quickly opened up a five second margin over Teddy Clairet, who worked his way up to second, while Azcona and Magnus resumed their race one battle for third.

Again, it ended in disaster as Baert clipped the rear of Azcona down the front straight, pitching Azcona into the path of Magnus who also spun.

Clairet finished a distant second to Nagy while Baert claimed his second podium in a row.

Magnus made it round for fourth ahead of Boldizs and Al-Khelaifi and Filippi.

Davidovski beat Azcona to ninth, while Coronel and Kent completed the top 12.

The final round of the TCR Europe SIM Racing series takes place at a virtual Barcelona on Monday 22nd July.