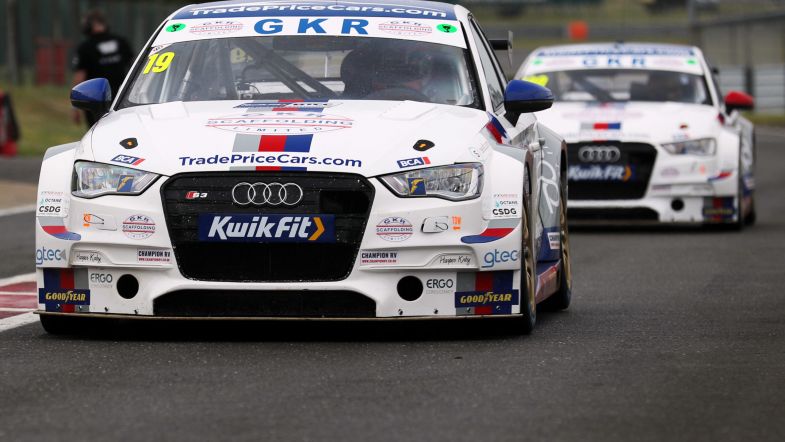 Trade Price Cars Racing pair James Gornall and Bobby Thompson have said they are optimistic about the upcoming BTCC season after the Audi team concluded its testing programme at Snetterton.

The two-day Goodyear tyre test marked the first time that either driver had got behind the wheel of the S3 since the season launch back in March, with the pair using the opening morning as a shakedown to get comfortable in the car.

That meant neither driver would ultimately post a representative quick lap, with rain then arriving during the Tuesday lunch break and impacting the remainder of the running.

Despite the tricky conditions, Gornall – the only rookie on the grid this season – was able to lap strongly during the two Wednesday sessions to end up with the eleventh fastest time.

“It’s been a productive two days for us at Snetterton, although I would have liked to have more dry running as that is what I really need,” he said. “The opening morning I was just getting used to the car again and then we changed the steering rack so I didn’t chase a time, and the rain then arrived and stayed for the rest of the test so we didn’t show our hand in the dry.

“Our pace in the wet was a big positive however and the car felt really good. We weren’t on track at the optimum time on Tuesday afternoon compared to some of our rivals, but on Wednesday we were right in the mix and to be just outside the top ten in those conditions is very encouraging.

“I can’t wait now for Donington in a few weeks for the racing to begin and to get started.”

Team-mate Thompson meanwhile was only two tenths of a second behind in the wet conditions in the sister Audi.

“It’s been a good test for us, although the conditions have certainly made it tricky on track,” he said. “As we’d not been out since the launch day at Silverstone, the plan was to use the first morning as a bit of a shakedown and it meant we didn’t set a quick time before the rain arrived. From there, I think we showed solid pace on the first afternoon as I got more of a feel for the car, and I was able to start pushing despite the conditions.

“Wednesday was tricky because the conditions were changing all the time and you could leave the pits thinking it was improving, but the rain would be coming down again by the time you got round to start a quick lap. I don’t think we really showed our true pace as a result, but we’ve ended up in a decent place on the times.

“I think we’ve been able to learn a good amount over these two days and I reckon there is a good chance that we’ll have to deal with some rain before the end of the season where we can put it into practice. Although more dry running would have been good, I’m happy with where we stand going into the start of the season.”