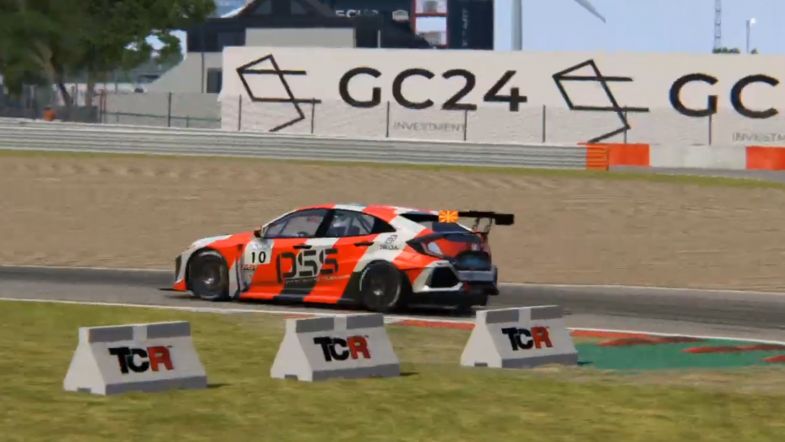 Nagy came into the evening’s penultimate round of the season having lost his on-the-road victory in Race 2 at Monza last week following a raft of penalties imposed by TCR Europe SIM officials, but backed up his dominance with another easy pole-to-flag win.

Nagy again got the best start off the line and beat the field into the first corner, as Magnus lost out to Teddy Clairet for second.

Further back, there was contact between the two Peugeots of Aurélien Comte and Jimmy Clairet as the pair navigated Turn 1, with the Honda Civic Type R TCR of Viktor Davidovski also getting involved. All three went through the gravel and dropped to the back of the order.

Magnus then reclaimed second place at the second chicane towards the end of the opening lap, with an assertive move down the inside of Clairet’s Peugeot, while Nagy scampered away at the front.

As has been the norm throughout the TCR Europe SIM Racing Series, Nagy quickly opened up a comfortable margin of 1.7 seconds from Magnus.

That was extended to almost four seconds by the sixth of 14 laps as Magnus defended heavily from Clairet behind.

The order stayed more or less the same among the top five but the Audi RS 3 LMS of Nicolas Baert was the big mover, climbing up from outside the top 10 to fifth after a series of well executed overtakes.

Nagy was once more unbeatable out front and duly took another easy victory, beating Magnus to the line by 4.8 seconds.

Clairet was this, ahead of Boldizs and Baert, while Luca Filippi recorded his best result of the season in sixth. Jimmy Clairet came home seventh, with Al-Khelaifi, Gustuvo Moura and Davidovski completing the top ten.

Davidovski got the jump on Colombani at the start of the second race, while Comte was involved in more first corner drama as he hit the back of Nagy.

That dropped Nagy to the back of the field, along with Boldizs who also spun at the first turn.

Davidovski led Moura and Filippi at the end of the opening lap, with Al-Khelaifi and Magnus in close company behind.

Magnus didn’t waste time in getting by Al-Khelaifi to take fourth at the start of the third lap and the Belgian, who will move up to WTCR when the racing season resumes this year, quickly set about catching Filippi in third.

Indeed, Magnus made the move stick on the very next lap, out-braking Filippi before the first chicane, although the Audi took a more than liberal line over the kerbs on entry.

Now on a mission, Magnus caught Moura for second but clumsily hit the rear of the Peugeot as the pair navigated Turn 2. Moura was spun out into the gravel, dropping down to ninth as a result.

After his spin on the opening lap, Nagy made a remarkable surge back through the field to eventually finish fourth at the flag.

The Hungarian initially struggled to make progress after dropping to the rear of the field, but pulled off a number of superb overtakes in the second half of the race to limit the points loss to Magnus.

Boldizs finished fourth ahead of Baert, with Teddy Clairet ending up seventh. Al-Khelaifi was eighth, while Colombani and Moura did not appear to make the finish.