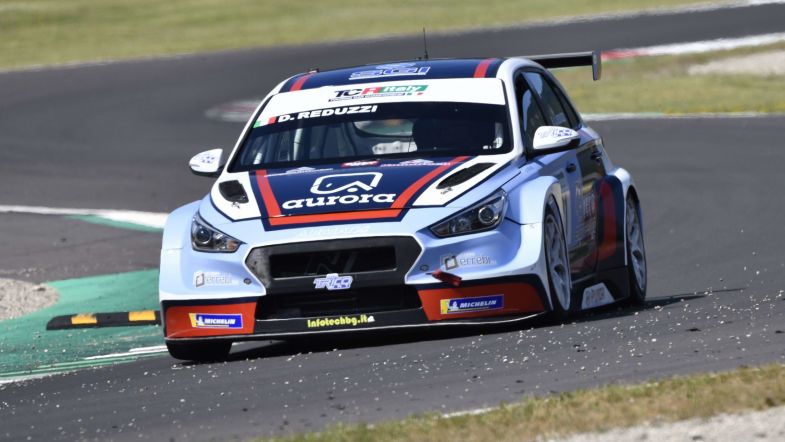 Jelmini had taken the flag first after storming through from sixth on the grid, and passing Reduzzi at the start of the final lap, but was penalised for his part in contact which ended the races of both Francesca Raffaele and Simone Pellegrinelli.

Both reversed grid pole-sitter Mauro Guastamacchia and fellow front-row starter Ettore Carminati were slow off the line which allowed a fast-starting Tavano to sensationally leap from eighth on the grid into the lead exiting the second corner.

Tavano’s lead did not last long however as the Cupra pulled into the pits on the second lap.

That same lap, the Safety Car was deployed after Michele Imberti beached his Hyundai i30 N TCR in the Turn 11 gravel trap following an audacious overtaking attempt on Marco Pellegrinini’s Target Competition Hyundai.

The Safety Car’s one-lap intervention was also short-lived after contact between Felice Jelmini, Raffaele and Pellegrinelli at Turn 3 put both the latter two out of the race.

The trio went into the corner as one, with Jelmini on the inside of the kerb hitting Raffaele’s Audi RS 3 LMS who in turn contacted Pellegrinelli’s Cupra León Competición.

The race finally restarted with seven minutes remaining, Reduzzi maintaining his advantage over Brigliadori – who managed to get past Girolami before the second Safety Car – and Pellegrini in fourth.

Despite his contact with Raffaele and Pellegrinelli, Jelmini – who finished third in Race 1 – started to make progress again, by getting past Pellegrini’s Hyundai with three minutes to go.

Jelmini then began to mount pressure on Girolami’s MM Motorsport Honda Civic Type R TCR before getting by the Argentinian for third.

Before long, Jelmini latched onto the back of the battle for the lead as Brigliadori closed right onto the tail of Reduzzi, who had run wide at Turn 12, hitting the back of the Hyundai i30 N TCR and slowing the pair up.

Jelmini was then brought into the mix and passed Brigliadori for second before using the slipstream down the main straight to his advantage to breeze int0 the lead at the beginning of the final lap.

Jelmini thought he had won his first race of the season after heading Reduzzi and Girolami to the flag, but was handed an eight-second penalty for his earlier contact.

That gave Girolami second place ahead of Pellegrini and Carminati.

Alessandro Giardelli was fifth, while Jelmini was classified sixth following his penalty.

The next TCR Italy race weekend takes place at Misano on August 2.