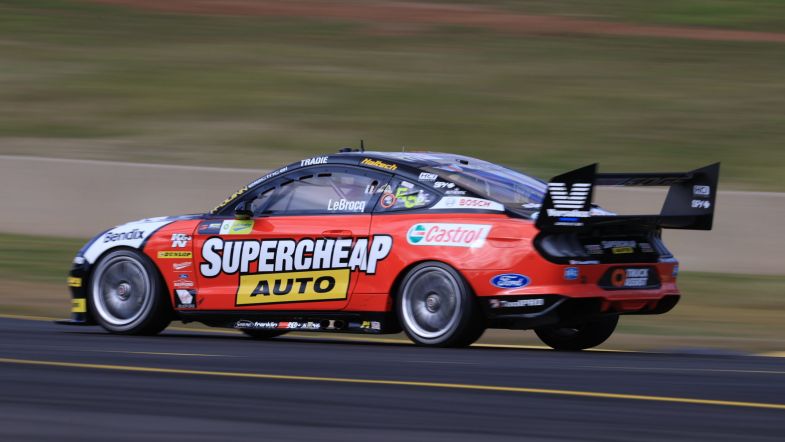 The Supercars Championship now has a new winner after Jack Le Brocq was able to hold off two other young guns in the dying laps of today’s final race at Sydney Motorsport Park to take his first victory with Tickford Racing.

It was anything but easy for the 2016 Super2 series runner-up, having jumped the early race leader Andre Heimgartner in the pit stops as the polesitter came home for a tight second place, making it a Ford one-two at the front.

Heimgartner was able to make good use of the soft Dunlop tyres in his Kelly Racing Mustang at the start of the race, getting through the first few turns in the lead as David Reynolds shot to second from fifth thanks to a quick start aboard the Erebus Motorsport Commodore.

Though he started in third, championship leader Scott McLaughlin dropped down the order with used soft rubber bolted on to the DJR Team Penske car, copping a hit on lap seven which forced him to pit for another set of the stickier compound.

By lap 10 it was still Heimgartner in the lead with Reynolds trailing him as Jack Le Brocq showed pace behind in third, bringing the Tickford Racing Mustang into the pits on lap 12 for an undercut on the others.

Wanting to block the Tickford driver’s advantage, Heimgartner and Reynolds came in to the pit lane on lap 13, rejoining the track on either side of Le Brocq though with warm tyres, he was able to get the #55 past Heimgartner’s car to take the effective race lead.

The gap between the lead pair remained under a second as Heimgartner tried to keep up with Le Brocq but left himself vulnerable later in the stint to Reynolds, searching for his first win since 2018 for Erebus while the two cars in front were hunting down their first ever Supercars victories.

Behind the trio, Todd Hazelwood was chipping away in his Brad Jones Racing #14 entry, having displaced the Team 18 car of Mark Winterbottom for fourth and coming at Reynolds at the rate of over half a second per lap with under 5 laps to go.

Hazelwood was able to get himself under the bumper of Reynolds with 3 laps left to run, harassing the #9 car as it gave Heimgartner a slight repreive as he closed the margin to Le Brocq ever so slightly.Reynolds fought Heimgartner on the final lap, compromising his run which let Hazelwood by with under half a lap to go.

Le Brocq was able to come home for his first win with Heimgartner just holding off Hazelwood as the top three all notched up their best ever Supercars results. Reynolds finished fourth, over seven seconds clear of the Team 18 entries of Scott Pye and Winterbottom.

Bryce Fullwood and Chaz Mostert ended a solid day for Walkinshaw Andretti United by finishing seventh and ninth respectively on either side of Jamie Whincup who had started the race on hard tyres for Triple Eight. Zane Goddard took his best career finish in his first full Supercars round with a 10th place in the last race of the round.

Race 11 winner Nick Percat finished in 11th, just ahead of the hard-charging Shane van Gisbergen with the DJR Team Penske duo of Fabian Coulthard and Scott McLaughlin ending up 13th and 14th respectively. McLaughlin leaves Sydney as the round winner with 228 points ahead of Percat on 204, Coulthard with 200 and van Gisbergen notching up 186.

The next Supercars race takes place at Darwin on August 8-9.