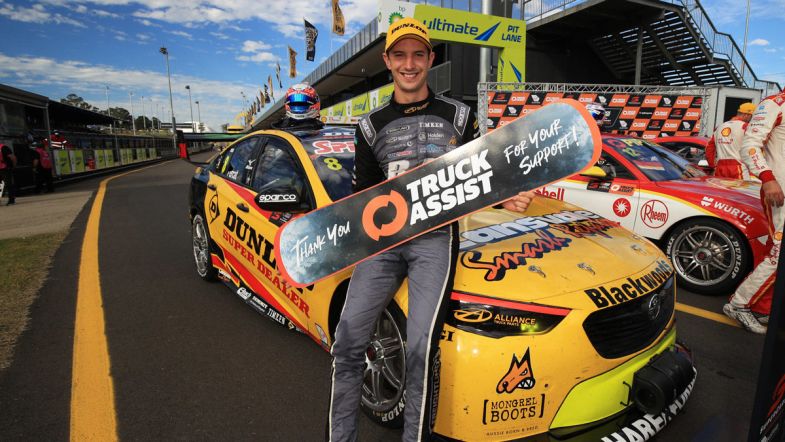 Brad Jones Racing driver Nick Percat has won his second race in as many rounds after again claiming the penultimate race at Sydney Motorsport Park, backing up his impressive form from round three of the Supercars championship.

A back-to-back soft tyre strategy helped the South Australian to claim his fourth series victory, going from third on the grid to taking the chequrered flag some nine seconds clear from second place.

The DJR Team Penske cars of Fabian Coulthard and Scott McLaughlin came home in second and third respectively, the latter having got by the Tickford Racing entry of James Courtney in a drag race to the finish line after being back in fifth at the start of the final lap.

Despite initially leading the race after starting on soft tyres, the #97 Triple Eight machine of Shane van Gisbergen finished a distant eighth, having dropped well behind Percat after he took hard tyres in his pit stop to save rubber for the final race of the day.

A soft-soft strategy paid off for both Matt Stone Racing’s Garry Jacobson and the BJR car of Jack Smith, both clocking up their best ever career finishes with final positions of seventh and tenth respectively.

Percat’s win means he closes the gap to the Tickford Racing entry of Cam Waters in the championship standings, now sitting fifth overall as McLaughlin extends his title lead to 125 points over Jamie Whincup after the Triple Eight driver could only manage 17th in the race.

The third and final race for the round gets underway at 1450 local time, running for 32 laps with a mix of tyre conditions across the field.