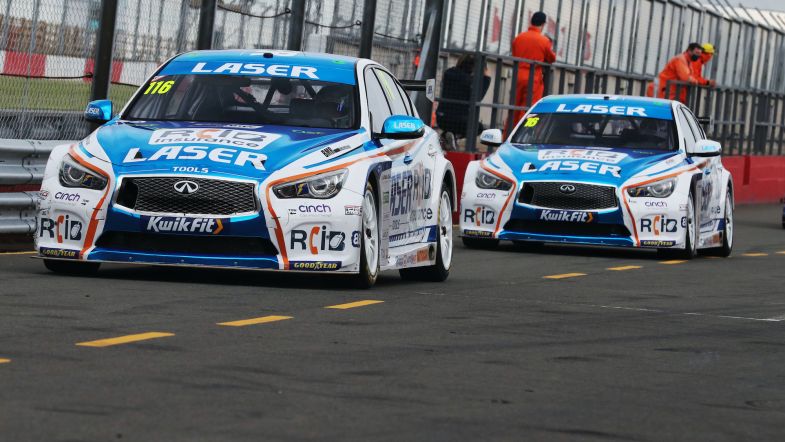 Ash Sutton secured the first BTCC win for the Infiniti Q50 with a storming drive to victory in the final race of the weekend at Donington Park.

The former champion had showed the pace of the Laser Tools Racing car throughout race day, and capped a fine recovery from an off in race one by becoming the third different winner of the day as the delayed 2020 campaign finally got underway.

Sutton had started the final race down in eighth on the grid, with the Hyundai i30 N of Chris Smiley having been drawn on the reverse grid pole by race two winner Colin Turkington.

Smiley however lost out at the start to the fast-starting Ford Focus of Ollie Jackson alongside, and was forced to defend hard from Stephen Jelley as the field headed into turn one for the first time.

After an early Safety Car – called after Jack Butel was tipped into a spin by Ollie Brown at the Old Hairpin – Jackson was able to maintain the lead from Smiley, Josh Cook and Adam Morgan, who had got ahead of Jelley by the end of the first lap.

Sutton was soon charging up the order to run inside the top five and quickly closed on the leading quartet ahead; jumping up to third on lap seven after Smiley battled ahead of Jackson and the Ford driver found himself shuffled down the order.

Sutton quickly took second from Cook at the Chicance and then on the exit of Coppice on the next lap, got a run on Smiley to take the lead. From there he was never headed to secure the first win for Laser Tools Racing since the switch to the Infiniti last season.

Smiley held on to secure second place and the first podium for EXCELR8 on the debut weekend for the Hyundai ahead of Cook and Morgan, with Jackson left to wonder what might have been in fifth spot in the Focus.

Tom Ingram took seventh for Speedworks after a big battle throughout with Honda pair Dan Cammish and Neal – who followed him home in seventh and eighth. Jelley had also been involved in the battle before spinning out of contention at the end of lap six.

Tom Oliphant and Colin Turkington rounded out the top ten.