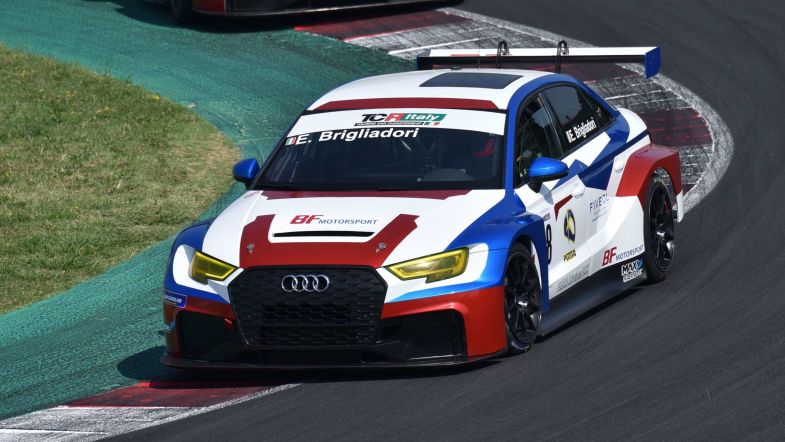 Brigliadori trailed Pellegrini for much of the race without managing to find a way passed. But the Audi RS 3 LMS driver pulled off a superb final corner dive on Target Competition’s Pellegrini with two laps remaining to steal victory by a fraction over one second.

It is the second successive victory for Brigliadori, who inherited the spoils following Felice Jelmini’s exclusion from Race 1 on Saturday.

Michele Imberti started from pole position but was quickly beaten to the first corner by Salvatore Tavano, who produced another lightning start from third.

Brigliadori also got by Imberti and ran second early on before dropping behind Pellegrini’s Hyundai i30 N TCR.

Once both got past Tavano’s Cupra León Competición, the race became a two-way fight between Pellegrini and Brigliadori, with the pair never separate by more than a second throughout.

Brigliadori’s Audi RS 3 LMS was perhaps the faster car in the second half of the race, but Pellegrini was able to withstand countless attacks around the back of the circuit, particularly in Turns 13 and 14.

Brigliadori then made his move at the final corner with two laps remaining. Pellegrini was slower out of the penultimate corner which allowed Brigliadori to dive for the inside line. The pair made slight contact but the Audi got the move done on exit.

Having made his way into the lead, Brigliadori saw out the final lap to take the win by just over one second from Pellegrini and Jelmini.

Tavano finished a distant fourth after appearing to suffer for pace in his new Cupra. The reigning Series champion was almost immediately under pressure from Jelmini once the top two got by him.

Jelmini eventually got past but only after Tavano dipped a wheel onto the grass of the final corner, giving Jelmini, who was excluded from his on-the-road victory in the opening encounter on Saturday, the outside line into the first chicane.

Tavano’s pace tailed off even more after Jelmini overtook him and finished fourth ahead of Ettore Carminati and Franco Girolami.

Girolami’s MM Motorsport Honda Civic Type R TCR had a quiet race en route to sixth in the end, but the Argentinean at least made the finish following a disappointing retirement in Saturday’s opening race.

The next stop on the TCR Italy calendar is Imola, which takes place on the weekend of the 28-30th August.