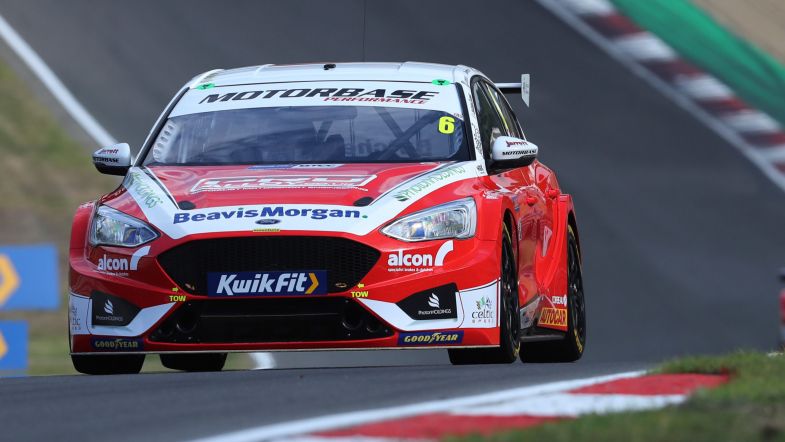 Rory Butcher secured his second pole in the British Touring Car Championship after coming out on top of a titanic battle for top spot in qualifying at Brands Hatch.

Butcher had earlier run into issues in free practice after a puncture on his Motorbase-run Ford Focus saw him take a trip through the gravel at the final corner, but the Scot proved to be the man to beat in what became a huge four-way fight for pole.

Butcher set his quickest time during the first half of the session with a 1:31.111s being the fastest seen so far this weekend, with the reigning Independents’ champion laying down a marker for his rivals to try and beat.

Jake Hill, quickest in both practice sessions, was the first to have a serious go in his MB Motorsport Honda Civic as he went just 0.055s slower to slot into P2 only to then be beaten by Butcher’s team-mate Ollie Jackson as he put his Ford into second spot.

However, Motorbase’s hopes of a 1-2 were quickly ended by Dan Cammish as he split the two red cars – going 0.007 quicker than Jackson to edge onto the front row.

Whilst both Jackson and Hill would attempt to go quicker late on, that would prove to be a step too far with the top four ultimately ending up split by just 0.055s when the chequered flag flew.

An impressive ‘best of the rest’ was points leader Colin Turkington, who would set the same time as team-mate Tom Oliphant – securing the place by virtue of posting his lap first.

Oliphant was one driver to laps to track limits over the course of the session before being able to nail a time that counted.

Senna Proctor’s strong form continued in the EXCELR8 Hyundai with seventh on the grid ahead of Tom Ingram, with BTC Racing pair Josh Cook and Tom Chilton rounding out the top ten.

Brands Hatch race winner Ash Sutton was pushing hard in the Infiniti but could only manage 14th on the grid in the Laser Tools Racing Infiniti.

Cammish’s second place – matching his result from Brands Hatch – means he leads the new ‘Wingfoot Award’ for best qualifier by three points from Turkington, with Butcher in third.