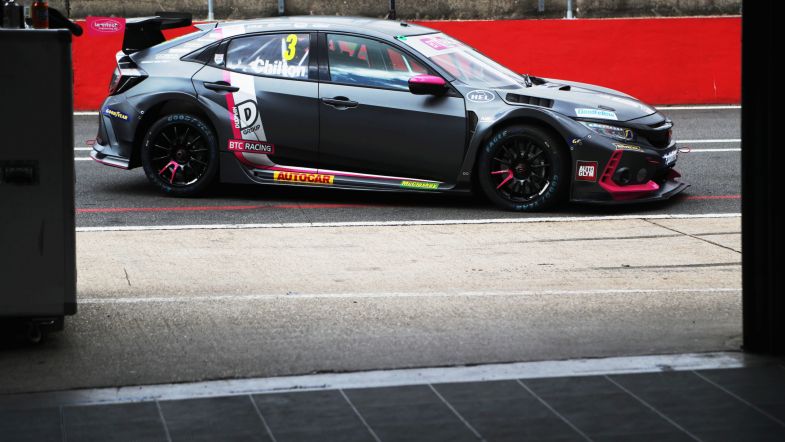 Tom Chilton says he hopes that the BTC Racing team can come out fighting on race day after admitting that qualifying in tenth place at Brands Hatch was “a shock”.

Chilton had started the day in fine form around the famous Grand Prix layout as he set the second fastest time in the opening practice session, although he would slip back to ninth in FP2; where he was one of the drivers who would fail to lap quicker.

The 14-time race winner would go into qualifying hoping to fight back towards the sharp end of the grid but would fail to find as much time as a number of his rivals as he posted the tenth quickest time; a fraction of a second down on team-mate Josh Cook.

Although well placed for points on race day, Chilton admitted that he had hoped for more, particularly with the similar Honda Civic of Dan Cammish having picked up a front row start despite carrying additional ballast onboard.

“It was nice to get the most from the car in that session and we’ve locked out the fifth row but we couldn’t get more,” he said. “The only worry is that Dan is on front row with 48kg and as much as we got the most we could, clearly we have more to find. We were quick out of the box in FP1 and haven’t had to do many changes, so it’s a bit of a shock to be down in tenth if honest.

“I expected the ballast to hurt more than it has done but there are a few drivers in front of us with weight so it hasn’t had the same impact as a few years ago when I came here third in the standings and was back down in 15th spot.

“The plus for us is that our qualifying time came on lap three or four so the car is good on its tyres, and that should mean we have a good race car.”

Qualifying could have seen all three BTC Racing cars together on the grid, with the Clever Baggers-backed entry of Michael Crees briefly splitting his more experienced team-mates before losing his fastest time to track limits.

As a result, he will start race one down in 18th spot.

“I’m gutted as it was a genuine time and I just caught the pressure pad at Graham Hill Bend,” he said. “I would have split Josh and Tom on the grid which would have been amazing, but instead I’m down in 18th; but we just have to deal with what we’ve got.

“We have some pace to find as we are down a little but for me, my focus this season is on the Jack Sears Trophy and I’m just behind Sam [Osborne] and Bobby [Thompson] so it’s still on for race day.”