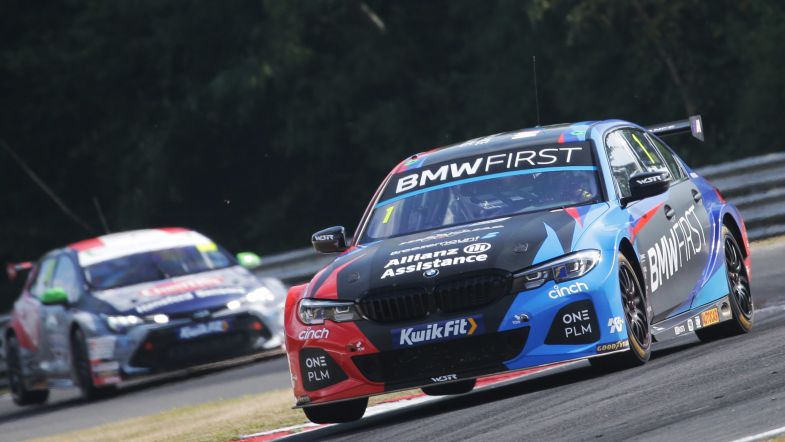 Colin Turkington has moved 17 points clear in the BTCC standings after securing his second win of the season in race two at Brands Hatch.

Now with maximum ballast on his Honda Civic Type R, pole man Dan Cammish bogged down badly at the start which helped Turkington to charge into the lead ahead of Ollie Jackson and Tom Ingram, with Cammish dropping back down to fourth.

Ingram wasted little time in getting ahead of Jackson with a fine move up the inside at Sheene and a recovering Cammish would then get past the Ford when Jackson ran wide at the same place on lap three, just as the race went behind the safety car.

That was thanks to a clash between Michael Crees and Bobby Thompson as the pair battled for the lead amongst the Jack Sears Trophy drivers, with Crees looking to get up in the inside at Hawthorns.

Contact on the run down to Westfield would then end with the pair spinning off into the gravel, with the safety car coming out as the two cars were recovered.

It would be lap nine before the action resumed with Turkington and Ingram getting the jump on Cammish behind. Ingram tried to find a way ahead exiting Graham Hill Bend with the squabble between the pair allowing Cammish to close in to make it a three way fight for the lead.

Behind, Jackson’s hold on fourth would be ended at the start of the following lap as Chilton slipped up the inside at Paddock Hill Bend but the BTC Racing man then suffered a puncture going into Westfield and dropped out of contention – putting Jackson back up to fourth but with an ever-increasing train of cars behind him.

The Motorbase man would hold on until the end of lap eleven when Ash Sutton was able to get a run into the final corner and managed to get up the inside in the Laser Tools Racing Infinit to take the place.

Jackson then had his mirrors filled with the Mercedes of Adam Morgan and Tom Oliphant’s BMW, with Rory Butcher just behind in eighth from the back of the grid.

The charging Scot dispatched Oliphant at Hawthorns to go seventh on lap 13 and then got a run on Morgan into Surtees on the next lap to move up to sixth.

Jackson would be the next target for Butcher as he got a run out of the final corner to go into fifth place and that quickly became fourth as Cammish slowed heading onto the GP loop and plummeted down the order.

Out front, Turkington would be untroubled through to the flag as he secured his second win of the campaign with Ingram unable to keep pace with the BMW after the restart.

The Toyota man instead had to settle for second with Sutton in third and Butcher an impressive fourth after making up no fewer than 21 places.

Jackson followed his team-mate home in fifth ahead of Morgan and Oliphant, with more points for Senna Proctor in eighth. Stephen Jelley and James Gornall rounded out the top ten – the latter securing his best result to date in the process.

Cammish would end up down in 19th having managed to get his car to the finish despite what would emerge to be power steering issues, with Matt Neal retiring with a similar problem.

There was disappointment for Jake Hill as he pulled off whilst running inside the top ten in his MB Motorsrt-run car, whilst retirements for both Josh Cook and Tom Chilton capped a disastrous race for BTC Racing.