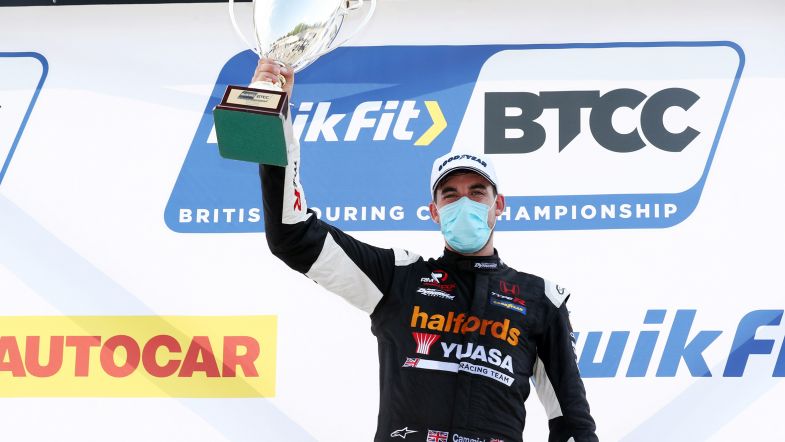 Dan Cammish was left frustrated after a strong start to race day at Brands Hatch ended in disappointment from the latest rounds of the BTCC season.

The Honda man was in the right place at the right time to secure victory in the opening race after a puncture for long-time leader Rory Butcher late on but it would prove to be the highlight of race day as his title challenge took an early hit.

Despite maximum ballast hampering him at the start of race two, Cammish looked well set to challenge for a podium finish only for power steering problems to hit – leading to him running off track and dropping down to 19th spot.

Further mechanical woes then forced Cammish to pull off track in race two having fought his way up into the top ten, leaving him nearly 30 points off Colin Turkington in the standings after two rounds.

“It was very tough coming back here [after the 2019 season finale],” he said. “I had a lump in my throat yesterday and, I won’t lie, I shed a few tears after race one. I pushed Rory early on; I didn’t let him have it easy.

“I had to give him a bit of a break in the middle of the race. I knew if I kept pushing him, obviously with what happened in practice with his blown tyre, I just thought maybe the car couldn’t take it and lo and behold it just let go I think with a couple of laps to go.

“From there, it turned out to be frustrating day in sweltering hot temperatures. A win and double DNF is not the weekend we wanted but the attrition rate has been high in the heat. We’re lighter now and determined to fight back.”