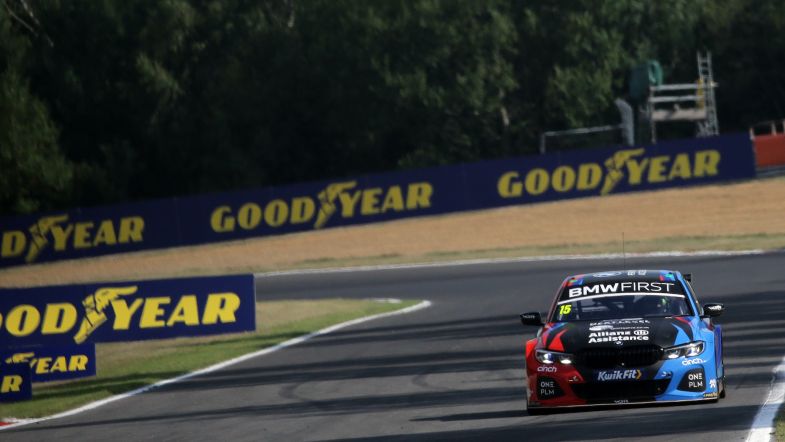 Tom Oliphant saw off the challenge of Ash Sutton in a race of attrition to secure a maiden BTCC win in the final race of the weekend at Brands Hatch.

The reverse grid draw had put Aiden Moffat’s Infiniti on pole and the Laser Tools Racing man was able to hold the sport when the lights went out ahead of a fast-starting Stephen Jelley and Oliphant as three rear-wheel drive cars slotted into the top three places.

Jack Goff had been alongside Moffat on the front row but was slow away in the Team Volkswagen and was then knocked off by the Hyundai of Senna Proctor exiting Druids when Proctor got out of shape – collecting Tom Ingram’s Toyota and putting both cars out.

Moffat held the lead through the opening lap but slight contact with Jelley at the final corner would slow both drivers enough to allow Oliphant to blast past on the start-finish straight to move into the lead of the race.

Moffat would then run wide on the second lap and drop back down the order whilst the sister Infiniti of Ash Sutton was fighting forwards, moving up into second spot behind Oliphant with Rory Butcher also clearing Jelley to move third.

Sutton and Butcher would waste little time in chasing down Oliphant as a three-way battle for the lead developed.

On more than one occasion, Sutton had a look at the BMW ahead but Oliphant was able to keep his place at the head of the field as Butcher started to drop away from the lead two.

With just three laps to go however, Butcher suddenly slowed going into Paddock Hill Bend with a puncture – promoting Jelley up into third on an all-rear wheel drive podium. Smiley’s Hyundai briefly took fourth but then he went off on the exit of Sheene and clattered into the barriers – putting him into retirement.

Smiley’s stricken car removed one of the key overtaking places for Sutton going into the final lap, but the Infiniti would close in on the run to Clearways, with Oliphant holding on to secure his maiden win ahead of the former champion.

Jelley took third place for Team Parker ahead of Moffat, with Colin Turkington battling his way through to fifth to further strengthen his points lead.

Matt Neal was sixth in what proved to be a mixed race for Team Dynamics, with the three time champion racing from the back of the grid but team-mate Dan Cammish retiring mid-way through with a technical problem on his car.

Further back, Ollie Brown, Jack Butel and Nic Hamilton all scored their first points after a race of attrition that saw eight drivers fail to make it to the finish.