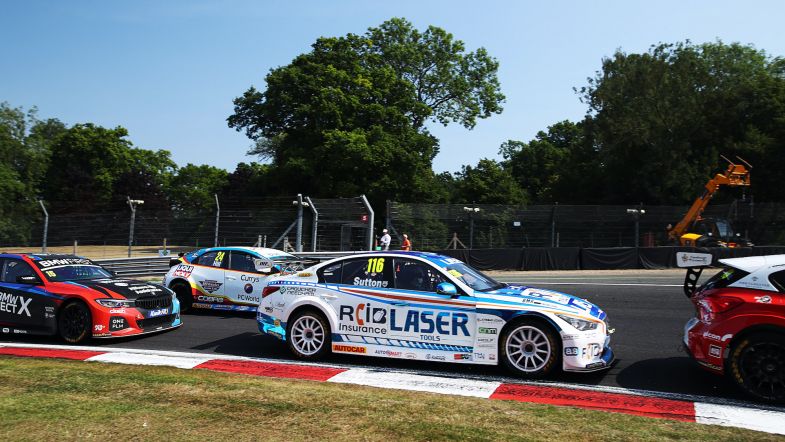 Ash Sutton was pleased to bounce back from a tough Saturday at Brands Hatch to snare two podium finishes from the latest rounds of the BTCC season.

Sutton could only qualify down in 14th place for the opening race of the weekend in his Infiniti Q50 having been forced to miss much of second practice, which left him with work to do on race day.

Showing improved pace, Sutton fought his way through to sixth spot in race one and then followed it up with a pair of podium finishes in races two and three.

It means the Laser Tools Racing man now sits second in the standings behind Colin Turkington, and he admitted he was thrilled to have recovered strong points from the second meeting of the campaign.

“We started the weekend with a bit of an inbalance in the car and didn’t have the same package at Donington,” he said. “We only did a few laps in FP2 due to a heat exchanger issue, and it meant we were on the back foot for qualifying. That showed as I was having to clutch at straws a bit and we missed the top ten; I was having to try and find the pace and explored the limits a bit too much.

“To go from 14th to sixth in race one was good and then we got up to the podium in race two when we got some weight out and it was a case of limiting what Turkington and Cammish could take from us. Lap one helped us in race three and meant I got up the order a bit and then I needed to just pick people off.

“Aiden [Moffat] and Stephen [Jelley] had a moment that let me into second but credit to Tom [Oliphant]’ he drove well and I couldn’t get ahead into the lead.

“We’ve had a good start and Oulton Park and Knockhill should be good for us. The car has a slightly longer wheelbase than the Subaru and whilst I think that means we’ll be wearker in some areas, we’ll be stronger in others. We’ll aim to qualify well when we get to Oulton Park and then race strong on Sunday, as we always do.”