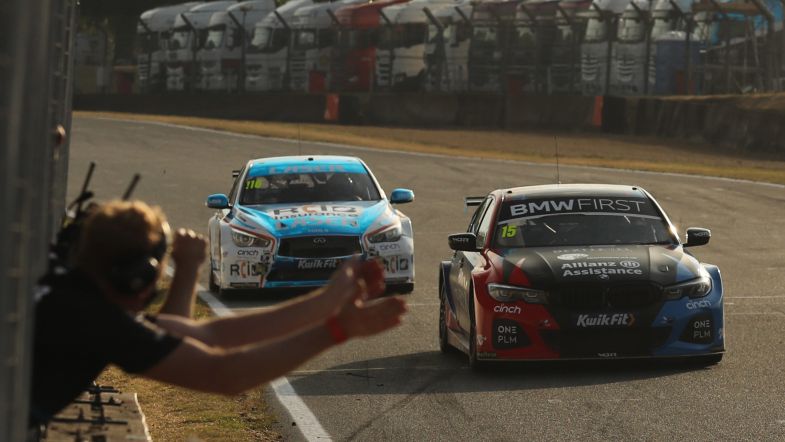 Tom Oliphant: “It was a well earned maiden win!”

Tom Oliphant admitted he was delighted to secure a “well earned maiden win” after taking the chequered flag out front for the first time in the final race of the weekend at Brands Hatch.

The West Surrey Racing driver had gone into the second round of the year on the back of a solid season opener at Donington Park, where he secured a podium finish for the second season in a row.

Qualifying inside the top six in sweltering conditions, Oliphant ran into trouble on the opening lap of race one after a clash with Josh Cook that resulted in a trip off track and dropped him down the order, but he fought back through to eighth spot and then added a seventh place finish in race two.

Drawn in sixth place on the grid for race three, Oliphant made the most of the starting prowess of the BMW 330i M Sport to jump up to third when the lights went out and then made the most of slight contact between Stephen Jelley and Aiden Moffat at the end of lap one to pass both around the outside on the run to Paddock Hill Bend.

Although he would quickly pull a small gap to the cars behind, Oliphant would soon have to contend with having former champion Ash Sutton behind but was able to keep the Infiniti man at bay to secure his first win in the series in his third year of competition.

“I’ve been quick all weekend and the car was mega when we put new tyres on in qualifying,” he said. “I made a small error that stopped me going for pole and in race one I was disappointed to have contact and drop to 14th. To be honest, I felt that that was my weekend done as we used our best tyres in the first two races and I was on used in race three.

“I managed to get a great start to move up P3 and then Moffat and Jelley gave me room when I got a run at the start of lap two and got into the lead. Having Ash Sutton on your rear bumper when you’re going for your first win means you can’t relax, so it certainly feels like a well earned win!”

Oliphant added that taking his first win now released some of the pressure on him given his position in one of the leading seats on the grid, with his focus on adding to his tally in some of the races to come.

“When I joined the BTCC it was a big step for me and Ciceley did a good job in my first year,” he said. “We had some good results and I think I was unlucky not to get a podium. Jumping to WSR last year with two guys who had won the title, I knew it was a big seat to fill and I feel I did well. It took some time to get the car to my liking and I had to work with my engineer to get it how I wanted it to be, but by the end of the season we were in a strong position.

“Going into this season, I knew I had the car underneath me and to start with a podium at Donington and then win here takes some of the pressure of me. I’ve been on every step of the podium now and having got that first win, I can head to Oulton Park with a smile on my face and chase another strong result there.”