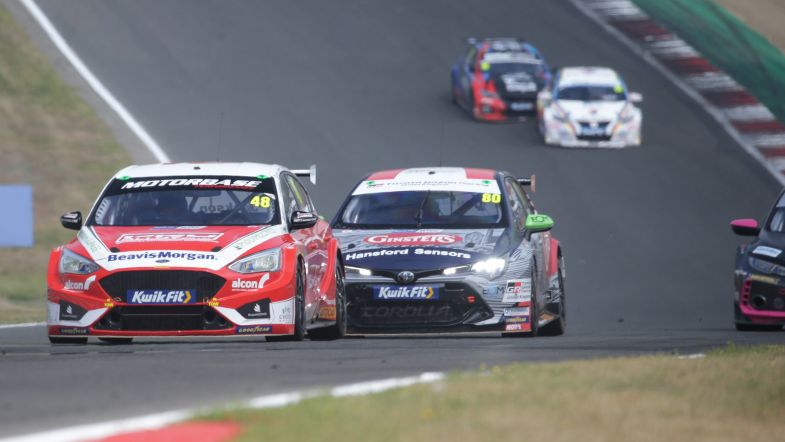 Ollie Jackson happy at being “ahead of schedule”

Ollie Jackson said he was ahead of schedule in his aims for the 2020 BTCC season after breaking onto the podium for the first time this year at Brands Hatch.

The Motorbase driver was able to build on a strong performance in qualifying at the wheel of his new Ford Focus ST, where he secured a second row start, with a fine drive to third in the opening race of the weekend – helping the team to make up for the disappointment of missing victory after a late puncture for team-mate Rory Butcher.

Jackson then followed it up with fifth place in race two despite the additional weight on his car before an unfortunate retirement in race three, but he refused to be downbeat after arguably his best weekend in the series to date.

In fact, the 43 points scored so far means he already has half of the total he secured across all of the 2019 season, which was his highest scoring campaign to date.

“It’s been a mega day although it is a shame it ended the way it did,” he said. “However, that just shows we have things still to learn when it comes to this new car.

“The pace has been fantastic all weekend and I’m really pleased to get this result, even though I didn’t think it would come this early in the season. As a driver, I always look to progress and do better than the season before, and last year it was the second half where I made the jump from being in the top 15 to challenging for the top ten.

“The aim this year was to try and go from the top ten to the top five, although this is the BTCC and I know it won’t happen every weekend. I wanted to do that by the second half of the season and didn’t think it would be possible by round two, so this bodes well for the races still to come.”