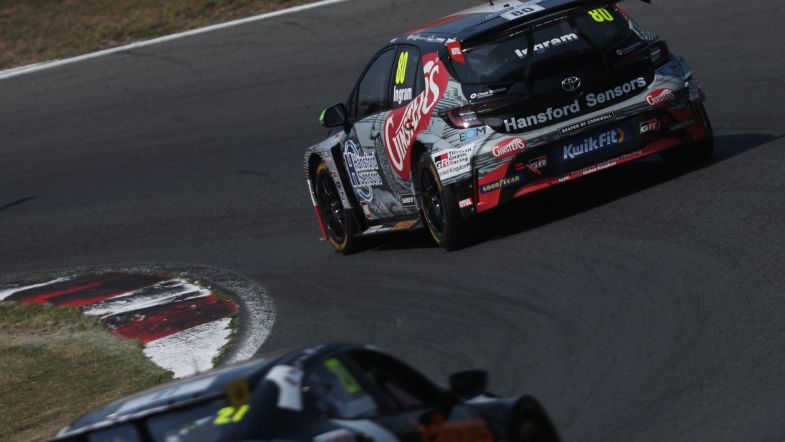 Tom Ingram admitted that he was pleased with the second weekend of the BTCC season as a whole, despite being “in the wrong place at the wrong time” during the final race at Brands Hatch.

The Speedworks driver headed for the Brands GP circuit looking to break onto the podium for the first time in 2020 having picked up three solid points finishes at Donington Park and qualified in eighth spot for race one in his Toyota Corolla.

A strong run in race one saw him take fourth place having harried the Ford of Ollie Jackson for much of the race and he then got away well when race two kicked off to move up into third at the expense of Dan Cammish’s slow-starting Honda.

Quickly able to then get ahead of Jackson this time around, Ingram would run second to Colin Turkington throughout – defending well to keep a recovering Cammish at bay before his Honda slowed with a power steering issue.

“We definitely had the speed to fight for the podium in race one,” he said. “Unfortunately, we just got caught up in a few too many squabbles, which seems to have been a feature of our season so far. Once I managed to clear [Jake] Hill, I quickly closed the gap to Jackson ahead. The Corolla was working brilliantly, but we simply lost too much time in the first half of the race, which was a little frustrating.

“It was fantastic to finish second in race two, though, and fastest lap proved the pace we have in the Corolla. I knew I needed to get past Jackson quickly after the experience of being held up in race one and my move was forceful but fair, without putting either of us at risk. It was just a shame that the safety car blunted our charge early on and possibly cost us a shot at victory, as we had to contend with Dan as well as Colin after the re-start. Once Dan disappeared, I backed off to look after the car and make sure I brought it home.”

Although Ingram would then retire from race three after contact from Jack Goff’s Volkswagen on the exit of Druids, he sits in a solid fourth in the championship standings and optimistic about his chances heading to Oulton Park in two weeks time.

“Race three was one of those things that happens sometimes when you’re starting in the middle of the pack – wrong place, wrong time,” he said. “Thankfully, it didn’t do too much damage to the car, but there’s a safety system in the fuel tank and the impact somehow activated the shut-off switch, which cut all the fuel to the engine so I couldn’t get going again.

“Given the rate of attrition in that race, I think we could have come away with another really strong result, but equally, at least we didn’t lose any points to some of our major rivals, so it could have been worse and we’re still in a very good position moving on to Oulton Park.”