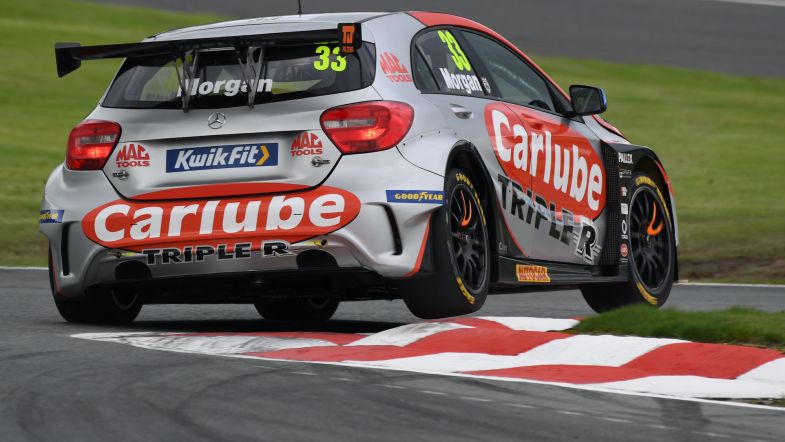 Adam Morgan secured his first win of the BTCC season after taking top honours in a red-flag shortened final race of the weekend at Oulton Park.

Bobby Thompson had been drawn on pole in his Trade Price Cars Racing Audi S3 but bogged down when the lights went out with Morgan’s Mercedes instead jumping into the lead ahead of Tom Oliphant’s BMW – which rocketed away off the line to jump into second.

Oliphant would keep the Mercedes honest in the opening laps of the race with the early focus being on the battle for third between Tom Chilton and points leader Colin Turkington. Chilton seemed to be holding up the BMW as the top two tried to break away, but Turkington was able to make a move stick at Knickerbrook – which also allowed race two winner Ash Sutton through.

Turkington quickly closed onto the rear of the battle for the lead and got ahead of Oliphant into second spot before turning his focus onto Morgan ahead.

Morgan appeared to be the cork in the bottle ahead of Turkington, Oliphant and Sutton but was placing his Mercedes in the ideal place lap after lap before the Safety Car was deployed following an accident involving Stephen Jelley and Nicolas Hamilton.

Dicing with Mike Bushell, Jelley suffered a spin on the exit of Druids and was then collected by Hamilton’s VW which in turn was hit by Ollie Brown – with the red CC going off heavily into the barriers.

With heavy damage to the barriers, the red flag was then thrown and the result of the race declared as at the end of the tenth lap. meaning Morgan was able to celebrate a first win in the series since Rockingham 2018.

Turkington and Oliphant would complete the podium ahead of Sutton with Chilton and Senna Proctor rounding out the top six. Jake Hill was seventh having dropped places early on, with Rory Butcher, Chris Smiley and Aiden Moffat completing the top ten.

Josh Cook would manage to salvage eleventh place to score some points after a tough race day but it was very much a case of what might have been for the BTC Racing man.