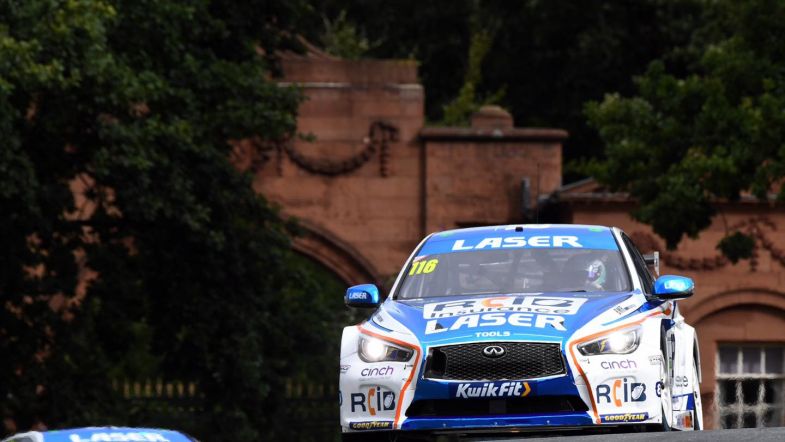 Ash Sutton produced another impressive drive for Laser Tools Racing to secure his second win of the BTCC season in the second race of the weekend at Oulton Park.

Sutton had started the second race down in eighth place on the grid having managed to make limited progress in race one from a tough qualifying session that saw his Infiniti Q50 down outside the top ten.

With circuit conditions still wet, but drying, it was Rory Butcher who was on pole after inheriting victory from Josh Cook and the Motorbase man held the lead when the lights went out from Dan Cammish, who put his Honda in the best place possible to block off a fast starting Colin Turkington as the field headed to Old Hall for the first time.

Sutton meanwhile was also on a charge, launching the Infiniti away well to quickly climb up to fifth and then got ahead of Jake Hill’s Honda on lap two before setting about chasing down Turkington ahead.

As Butcher built a small lead, Cammish was under pressure from Turkington for second but when the pair delayed each other on the exit of the hairpin on lap five, Sutton saw his chance to nip in between the Honda and the BMW into third spot – then taking second from Cammish at Lodge to sit second.

Immediately taking a second out of Butcher’s advantage on the next lap, Sutton quickly closed in on the Ford ahead and when Butcher ran slightly wide at Old Hall at the start of lap eight, Sutton pounced to take the lead.

Once ahead, Sutton eased clear to take his second win of the campaign and take points out of Turkington’s advantage in the standings.

Butcher would cross the line in second, with Turkington managing to third after a race long battle with Cammish for the final step on the podium. As the race wore on, so the pressure on Cammish increased and a small mistake at the hairpin on lap 13 allowed Turkington to get up the inside and make a move stick, with the BMW man quickly dropping Cammish across the closing laps.

Cammish instead found himself being chased down late on by Tom Ingram’s Toyota but held on at the finish to take fourth ahead of Ingram and Tom Oliphant.

The second BMW had been one of the stars of the race as Oliphant charged forwards in the closing laps to go from ninth through to sixth with impressive moves on Adam Morgan, Tom Chilton and Jake Hill.

Hill took seventh spot ahead of Chilton, with Morgan and Bobby Thompson rounding out the top ten – the latter securing the reverse grid pole at the same time.

In his 700th BTCC race, Matt Neal would take 13th spot despite mid-race contact with James Gornall’s Audi but there was disappointment for Josh Cook, who looked set to score before contact with team-mate Michael Crees saw him spin off.