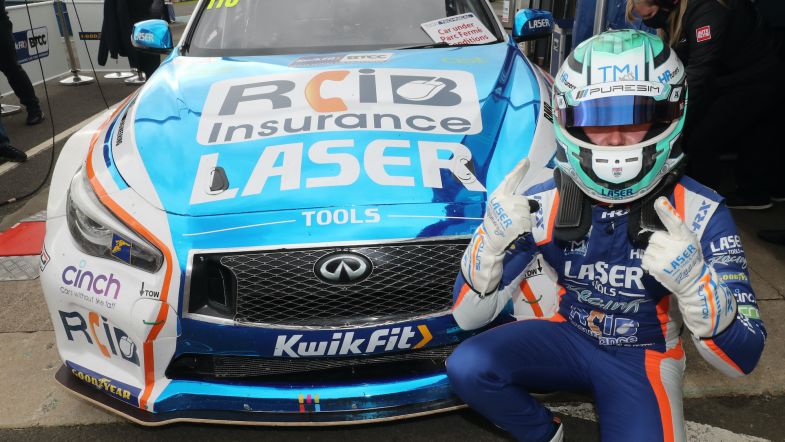 Ash Sutton insisted he was pleased to show the qualifying pace of the Infiniti Q50 after taking a first pole with the car at Knockhill.

The former champion has secured two wins already this season with the reworked car but has struggled for one lap pace in the most recent events at Brands Hatch and Oulton Park – where he qualified outside the top ten.

Having topped second practice, despite an upright failure that forced him to park his car on the side of the circuit, Sutton headed into qualifying confident about pushing towards the sharp end and would set two lap times that were good enough to take pole ahead of the Honda of Jake Hill.

“We’ve needed that,” he said. “It’s great to get the first Infiniti Q50 pole position, that’s another thing ticked off. But it wasn’t easy! Obviously the past couple of weekends we’ve suffered with pace in qualifying due to issues in Free Practice, but it was nice to have a free day today.

“That was the first time on a new tyre and the car was absolutely spot on. BMR Engineering and Laser Tools Racing have done a sterling job with it and I couldn’t have asked for a better car.

“Obviously it’s mega important to claim that little point to claw back on Colin [Turkington] for pole. The plan is to try and outscore him from that point onwards and this is our perfect opportunity. We’ve not been in this position yet this year so it’s our prime time to try and do something about that points gap between us.”