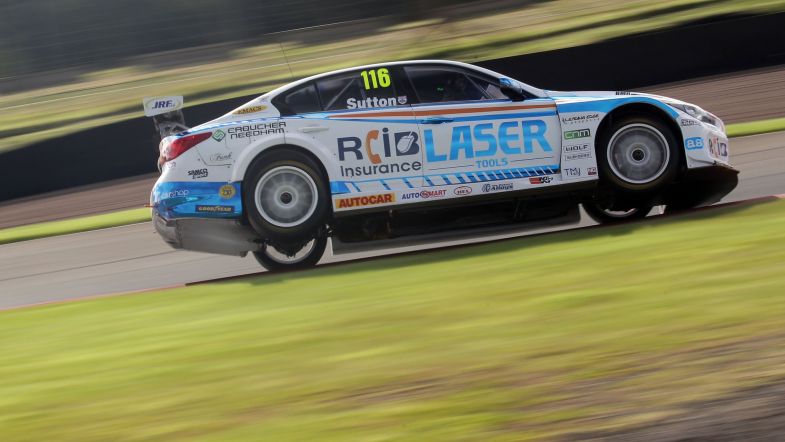 Ash Sutton secured the first pole position for an Infiniti in the BTCC after topping the times in a tightly-fought qualifying session at Knockhill.

Tom Oliphant was the first man to set a quick lap in the session but his time on provisional pole would be brief as Sutton immediately dropped below the 51s marker on his first qualifying run to show there were no ill-effects of the problem that had halted his Infiniti Q50 in the closing moments of FP2.

Sutton would then be beaten by Rory Butcher’s Ford as the Scot looked to try and secure his third straight pole before Tom Ingram took a turn at the top only to then suffer a spin at the chicane on the very next lap.

Sutton however then went back into provisional pole and bettered his lap once again to reclaim top spot, with Colin Turkington and Dan Cammish both getting ahead of Ingram before the session was halted after Matt Neal went off in the same place at Ingram exiting the chicane but was unable to prevent his Honda Civic Type R from clattering into the tyre barriers.

After the Honda was removed from the circuit and damage to the tyre wall repaired, seven minutes were left in the session and Jake Hill vaulted up into second spot with a lap just 0.053s down on Sutton in the MB Motorsport Honda.

Ingram was next to have a run as he went purple in the first sector only to lose time in the second and third sectors to leave him unable to improve on his lap – leaving Sutton well placed out front heading into the final seconds.

As the chequered flag dropped, Sutton was able to secure his first Knockhill pole having set two laps good enough for pole position with Hill taking second for is first front row start, despite reporting a misfire on his car.

Despite carrying maximum ballast, Turkington was an impressive third in his BMW 330i M Sport and just 0.083 off pole, with Cammish taking fourth despite the fact he would not take to the track after the stoppage for Neal’s accident.

Tom Ingram and Rory Butcher share the third row of the grid with Mike Bushell a solid seventh in the PMR Astra. Aiden Moffat’s best qualifying performance of the season saw him put the second Infiniti into eighth spot with Neal and Tom Oliphant rounding out the top ten.

Showing the highly competitive nature of the grid, every driver bar Jack Butel in 25th was able to set a time within a second of pole position.