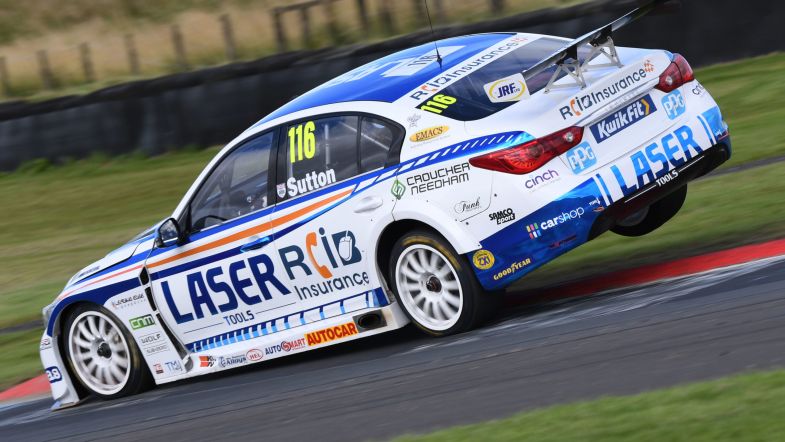 Ash Sutton topped the times in the second practice session for the Knockhill rounds of the British Touring Car Championship season despite late dramas on track.

The Laser Tools Racing man would be the driver to beat throughout the session in his Infiniti Q50, dropping into the 50s bracket in the early stages to immediately establish a handy advantage out front.

Sutton then improved his time later on to a 50.870s which would prove to be unbeatable despite him being forced to park the car late on with a rear suspension problem.

Second quickest would be the Toyota of Tom Ingram, although he too would have issues in the session after a gearbox issue meant he was limited to 15 laps and failed to set a quick lap until the closing stages.

Mike Bushell continued his solid start to the weekend in the Power Maxed Racing Vauxhall with the third quickest time ahead of Aiden Moffat, who led the Scottish challenge in fourth spot.

Adam Morgan was fifth as he seeks to build on his victory last time out at Oulton Park, with Senna Proctor’s Hyundai rounding out the top six.

The session would be halted briefly after James Gornall suffered a spin into the gravel in his Audi S3, which left him down in 23rd spot despite his best lap being just a second off top spot.

In fact, the top 17 drivers in the session were covered by just half a second.