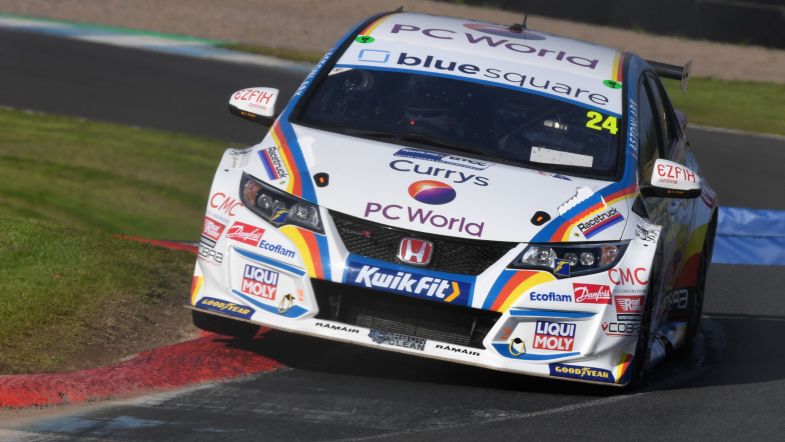 Jake Hill heads the way in opening practice at Knockhill

Jake Hill enjoyed the perfect start to the fourth round of the BTCC season at Knockhill after topping the times in the opening free practice session of the weekend.

The MB Motorsport driver was the only man to dip below the 51s mark during the 40 minute session at the wheel of his Honda Civic Type R and also went under the race lap record set by Mike Bushell whilst driving the very same car last season.

A lap of 50.757s was good enough to put Hill comfortably clear of Mike Bushell’s Vauxhall Astra as the Power Maxed Racing man continued to show strong speed on his return to the series, with his car now free of the success ballast he had to carry last time out at Oulton Park.

Bushell was just 0.001s clear of Tom Oliphant’s BMW, with Tom Ingram ending up fourth fastest having spent a large portion of the session on top of the times at the wheel of his Toyota Corolla. Infiniti duo Ash Sutton and Aiden Moffat then rounded out the top six.

Despite the full ballast on his car, Colin Turkington was just half a second off the pace in seventh spot ahead of Josh Cook and Dan Cammish, with the latter hitting the track for the first time this weekend after mechanical issues prevented him from taking part in Friday’s shakedown session.

Although the session was largely incident free, there were problems late on for both Michael Crees and Andy Neate. Crees spun off into the gravel at Duffus Dip, whilst Neate was forced to park his Motorbase Ford after his own trip through the gravel.