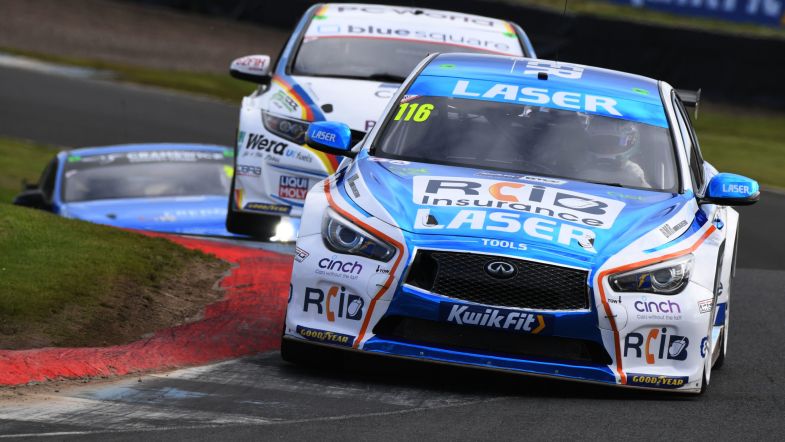 Ash Sutton doubles up, and closes in, at Knockhill

Ash Sutton did the double with victory in the second BTCC race of the weekend to make further inroads into Colin Turkington’s championship lead at Knockhill.

Sutton had started from pole in his Laser Tools Racing Infiniti Q50 after his race one success and once again made a solid start to ensure that he would head the field into turn one, despite the best efforts of Turkington on the run to Duffus Dip.

In fact, Turkington would get almost alongside as the pair headed into the corner, but Sutton had the inside line to retain his position whilst behind, Tom Ingram managed to get ahead of Jake Hill as the Honda driver went defensive to keep Rory Butcher at bay – squeezing the Motorbase man onto the grass.

The race quickly went behind the safety car however, with Mike Bushell and Jack Butel clashing at Scotsman and collecting Josh Cook – putting the BTC Racing car off into the gravel. That was particularly tough on the Honda team, which had somehow managed to repair the extensively damaged Civic Type R in order to get Cook on track for the race.

On the restart, the top two looked to break away, with Ingram also starting to gap Hill as he came under pressure from Butcher behind. Butcher made his move down Duffus Dip on lap five but was squeezed onto the grass heading into Scotsman, sliding on across the gravel and delaying Hill enough to let both Dan Cammish and Tom Oliphant through.

Butcher meanwhile would drop down outside the top ten as result of the incident.

As Sutton and Turkington squabbled for the lead, Ingram and Cammish started to close in but the race then went under caution a second time when Andy Neate, who had earlier pitted and was running just ahead of the leaders on track, suffered a spin in the same place as Cook had done.

Once the Ford was recovered, Sutton and Turkington scampered away at the front but as was the case in race one, the Infiniti had just enough to keep the BMW at bay as Sutton doubled up and brought Turkington’s points lead down to eight going into race three.

Ingram’s third place was less secure however, with the Toyota man forced to go defensive on more than one occasion before to keep Cammish at bay. Cammish was helped by having team-mate Neal as a rear gunner after he managed to get ahead of Oliphant’s BMW although a ten second penalty for the former champion meant he was running out of position on track.

Neal’s move on Oliphant slowed the BMW enough to let Aiden Moffat also sneak through to end up with fifth ahead of the Brands Hatch race winner, with Tom Chilton coming through to seventh spot ahead of Hill, who found himself struggling for pace with the additional weight on his Honda.

Chris Smiley and Butcher rounded out the top ten whilst Neal would end up down in 15th as a result of his penalty.