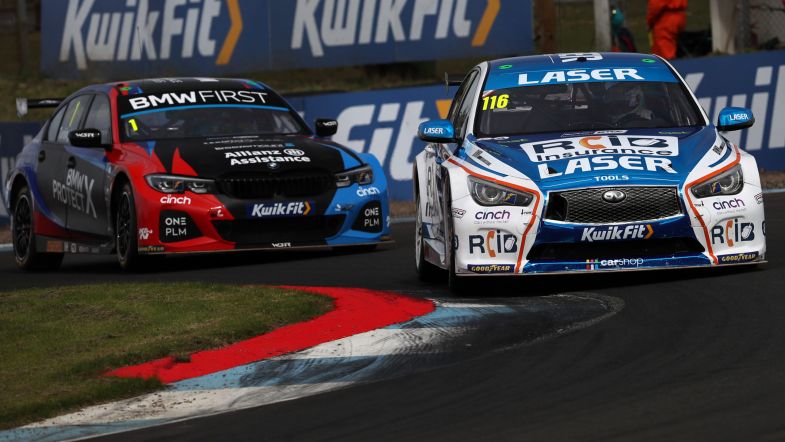 Ash Sutton praised his Infiniti Q50 as the “best touring car I’ve ever driven” after enjoying a strong weekend on track at Knockhill.

The Laser Tools Racing man headed to Scotland sitting second in the championship standings to Colin Turkington, but stormed to pole position in qualifying – putting the Infiniti at the head of the grid for the first time.

Sutton then converted pole into victory in both the first and second races of the weekend despite intense pressure from Turkington behind before taking eleventh in race three having found himself in the train of cars backed up behind the Hyundai of Chris Smiley.

Whilst that meant Turkington was able to stem the loss of points having finished in ninth, Sutton still took points out of his rival across the weekend as a whole and was delighted with how things had panned out.

“Races one and two were faultless and whilst it would been nice to get a few more points out of Colin in race three, I worked out pretty early on that things were quite robust and that it was more important to bring the car home,” he said

“I said earlier to ITV that that was the best touring car I’ve ever driven and I stand by that. I was shocked by how quick it was when we rolled it out of the truck and the performance we had and how it carried the weight; it was phenomenal. Laser Tools Racing and BMR Engineering have done a fantastic job with the car and I can’t thank them enough.”

With the Q50 having shown itself to be particularly strong through high-speed corners, Sutton will now seek to impress at Thruxton next time out although he admitted that the fact that the car will be running on the hard Goodyear tyre in Hampshire meant there would be an element of taking a step into the unknown.

“We’ll be okay at Thruxton I think as it’s a bit like Donington and the pace we had there – and the way the car rode the kerbs at Knockhill – means we should have a good package,” he said. “However, Thruxton is a unique challenge and we also have the different tyres to run there, so we’ll have to see how we roll out.”