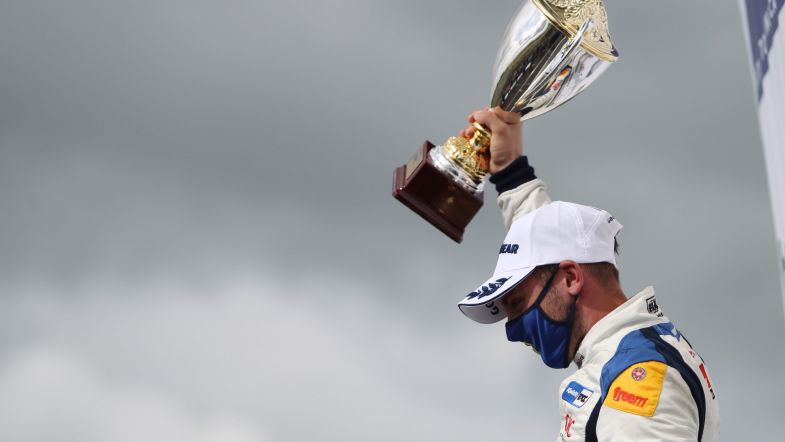 Jake Hill: “It’s crazy to be inside the top ten”

Jake Hill admitted it was “crazy” to have moved into the top ten in the BTCC standings on the back of a solid weekend on track at Knockhill.

The MB Motorsport driver had endured a disastrous start to his 2020 campaign, with engine issues at Donington Park and Brands Hatch leaving him with five DNFs from the opening six races.

Even at Oulton Park during round three, where he inherited a first podium of the year, Hill was forced to contend with a misfire and there was concern in the team awning at Knockhill when a further misfire developed in qualifying – although it didn’t stop him from qualifying on the front row of the grid for the first time.

Race day however would see the older FK2-spec Honda Civic Type R running without problems, and Hill took full advantage with a solid run to third place in the opening race after fending off the advances of Tom Ingram’s Toyota.

Additional ballast in race two hampered his chances of repeating the result although Hill still picked up a solid eighth place, and he ended the trip to Scotland with a solid fifth in race three to cap his highest scoring weekend in the series to date.

It means he now sits ninth in the standings, despite his early season woes.

“I’m chuffed to bits and it’s been another strong weekend for us,” he said. “Oulton Park was nice to get back on our feet and Knockhill has been a little bit better. My first front row start in the BTCC was a brilliant way to kick things off and then we’ve had three solid, solid finishes in the races with a podium, eighth and a fifth.

“I’m over the moon with the points, even though I’m not interested in them, and the other plus is there have been no engine issues. We’re still going to make some electrical changes for the next one given the issue in qualifying, but the car finished all three races and finished them well.

“It’s crazy to think we’re now in the top ten in the championship, but that is how the BTCC is. We’re four rounds in with five to go and there is still a lot to play for so it would be nice to creep up a little bit more in the standings – although not too much as then we’ll have to carry more weight for qualifying moving forwards! But it’s been nice to show that we can, and should, be up towards the front of the grid.”