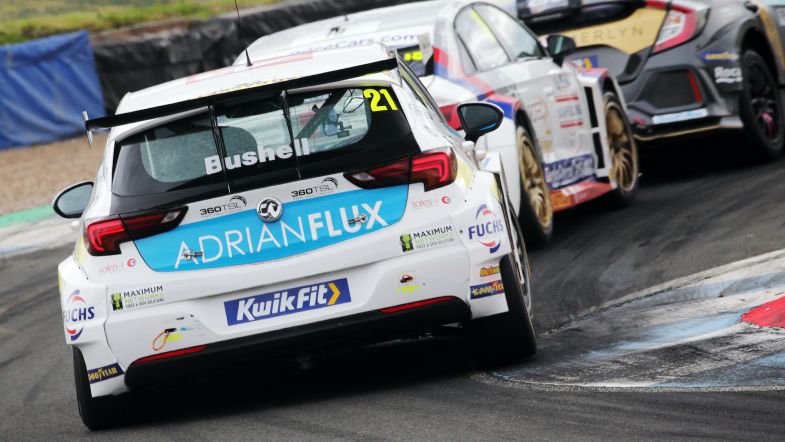 Mike Bushell could remain at the wheel of Power Maxed Racing’s Vauxhall Astra for the next round of the BTCC season at Thruxton after a disappointing end to his two-meeting stint with the team at Knockhill.

After the team announced it would run a single car for the final seven events of the season, the former Clio Cup champion was named as driver for the rounds at Oulton Park and Knockhill with plans in place for him to then step into an engineering role for the remainder of the campaign.

Having been unable to score at Oulton Park despite showing strong pace, Bushell headed to Scotland seeking to replicate the kind of form that saw him break the lap record when racing at the circuit twelve months ago.

Seventh on the grid in qualifying, Bushell looked well set for a solid top ten finish in race one before a trip off track at Duffus Dip saw him forced to pit to have grass removed from the radiator.

Forced to then try and come from the back of the grid for race two, Bushell just missed out on points with 16th but the final race ended in dramatic fashion when he collided with Ollie Jackson’s Ford Focus after the Motorbase man spun in front of the pack at the chicane, and was then collected by the Honda of Sam Osborne.

It left Bushell with a dislocated shoulder and damaged ligaments in his wrist, but with a three week break until Thruxton, the 31-year-old could yet extend his run behind the wheel to include the fifth meeting of the campaign.

“The car is fast on a single lap after getting to grips with it and working on set-up with the team, but I need to improve a little on race pace,” he said. “I was very disappointed in myself in race one, and I struggled to hold off Matt Neal and Aiden Moffat until I made an error into turn one mid-race, which meant a visit to the pits was inevitable, costing us a guaranteed points finish in the race.

“I’m feeling a little bit sore [after race three]. I’m just keen to find out how the car is looking, and work towards returning at Thruxton if we can make it happen between us.”