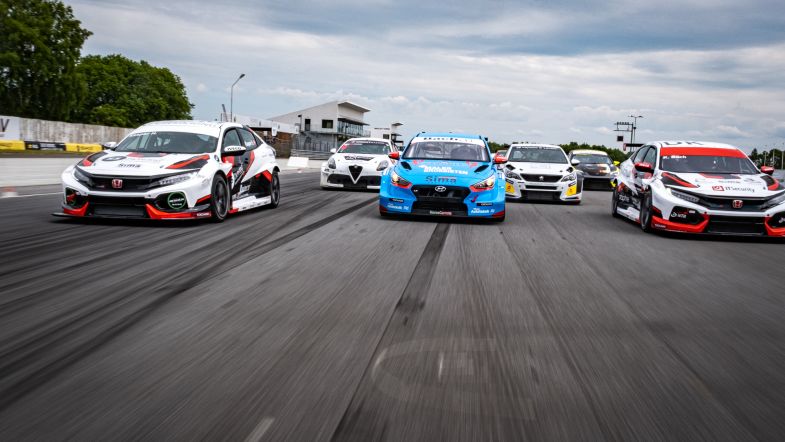 It’s been more than two months since the first round of the TCR Denmark championship was held at FDM Jyllandsringen and this weekend brings twice the action in the series with a double-header event seeing one round held on both Saturday and Sunday.

The summer break, even though it came early, was appreciated by LM Racing drivers Jan Magnussen and Nicolai Sylvest. Their pair of VW Golf GTI TCRs suffered technical difficulties throughout the first race weekend, and Magnussen looks forward to coming back to the championship will full power.

“We tried a lot of things in the first race weekend, but then we had issues with the turbo, and we never really got a feel of the changes made,” he said, adding that a good day of testing between the races seems to have changed a lot.

“I definitely think that both the car and the team has developed a lot over the summer. I am not sure if we will be the fastest out there, though. Both Hyundai and the Hondas are looking quite strong, but we are far better prepared this time around.”

Team-mate Sylvest is currently second in the championship and hoping to improve that position over the course of the weekend.

“Despite the summer break, I am still up to speed after two days of testing,” he said. “They went well and I put in some good laps, so I feel quite comfortable going into the weekend.

New on the grid for this round is Casper Elgaard, joining the championship with TPR Motorsport in a Honda Civic Type R TCR. The former Le Mans winner and ex-Massive Motorsport team manager tested at Jyllandsringen in August, and is looking forward to getting back on track.

“It was really nice getting back racing again, and I think we had two good days of testing,” he said. “We are a new team and we obviously need to learn a bit although we all know each other from other teams and championships. Personally, I would have liked to be a bit further up the timing board, but that is only my personal feeling and not what I or the team expected for the test days.”

Sole Hyundai i30N TCR driver, Martin Andersen, saw improvements on the car and his own performance during the August test days, setting the best lap time of both days. But he believes there is more to come.

“Qualifying will be ever so important, and our plan is to keep developing,” he said. “I hope we can qualify in the top three, and a pole position would be absolutely fantastic. I feel we’ve got a bit extra for the races, too, so I am really excited to see how the races will be.”

Jonas Lindhardt took the leap from Formula 4 to TCR this spring. For him, this weekend’s race at Jyllandsringen will be all about staying on the learning curve as he did in the first weekend.

“There was so many new experiences for us in the first race, but I think we came through nicely,” he said. “We had never tried working on the car in the pitlane before – not to mention that it was my first race with a front wheel driven car.

“I think I spent a few front tyres getting the driving style right, but I think I am getting there now. We switched to TCR Denmark to try a new challenge, so of course this was expected. The car is a completely different story to the Formula 4 car; actually a bit more like a kart, twisting all the way through the corners.”