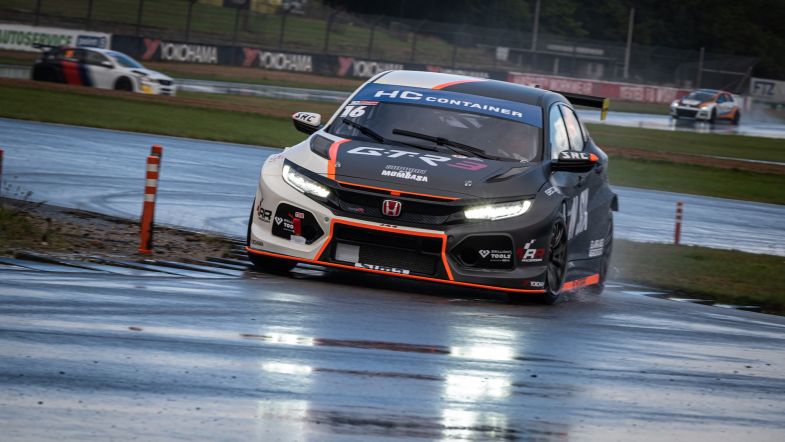 Former Danish Touringcar Championship champion Casper Elgaard made a solid return to the TCR Denmark series by claiming pole position and a victory in a hectic first day at Jyllandsringen with qualifying and two races.

The TPR Motorsport driver claimed pole by posting a 1:19.516 lap time, more than half a second ahead of Kasper H. Jensen.

The weather played its part in Elgaard’s road to pole position. As the field came out on the track, the rain had only just stopped, and on a drying surface towards the end of the session, drivers tried their best to get a lap in just before the chequered flag.

Leading the first race from pole position, Elgaard was chased by fellow Honda Civic Type-R TCR driver Kasper H. Jensen throughout the race, with several attempts to overtake; none of them successful.

While the leading pair kept each other busy, there was not much action to be seen in the rest of the field. Martin Andersen in third kept Jacob Mathiassen behind him for the entire race distance.

René Povlsen had the reversed grid pole position for the second race ahead of Kenn Bach. After a few corners, Bach took the lead, holding on to it for three laps before Markussen and Andersen passed him.

After applying a good amount of pressure on Markussen, Martin Andersen overtook on the back straight and never looked back. The Hyundai i30N TCR driver increased his gap for each lap, winning the race almost five seconds ahead of Markussen.

Third came Bach ahead of Sylvest and Jensen, who spent quite a bit of the race fighting with former team manager Elgaard.

Jensen heads the standings on 120 points with Andersen second on 106 points and Sylvest third on 98 points.