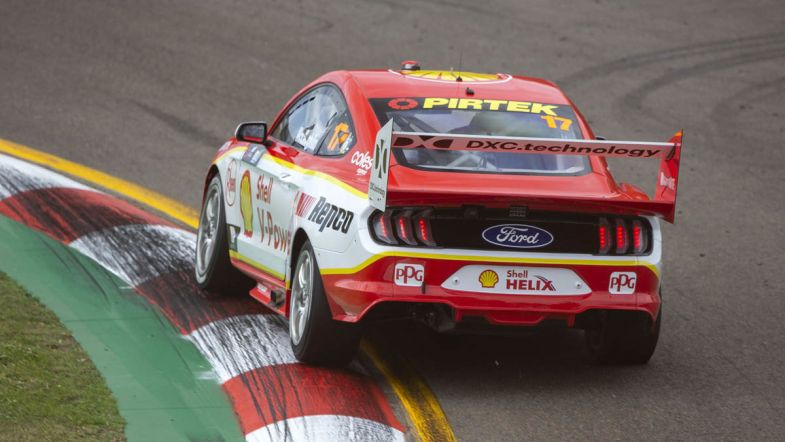 Scott McLaughlin has kicked off in the second straight round at Townsville’s Reid Park circuit where he left off a week ago, securing a race win to start the weekend after taking pole position earlier in the day.

A relatively comfortable win for the DJR Team Penske driver was helped by his sixth pole position at the Queensland venue, going two-tenths faster than Kiwi compatriot Shane van Gisbergen who managed second on the grid after a tricky first weekend in Townsville.

McLaughlin held on to a comfortable lead in the opening stanza of the race, slowly stretching a gap over van Gisbergen as the top five cars were split by only a few seconds with Cam Waters putting his Tickford Racing car behind the Triple Eight machine in second with former team-mate Chaz Mostert holding down fourth aboard the Walkinshaw Andretti United entry.

Title contender Jamie Whincup was able to race up to fifth in the opening laps after qualifying a relatively low seventh, showing race pace to put himself in the window for an undercut, being the first car into the pit lane and only taking two tyres.

Not wanting to lose time to his championship rival, McLaughlin was in next, taking the now common three tyre stop to come out with a smaller gap to Whincup as Mostert and Waters followed suit soon after.

With van Gisbergen doing his usual thing of running long in the opening stint, he held the race lead while further back it was Waters and Mostert who were hunting down his team-mate Whincup, struggling early on after only taking on the rear tyres.

van Gisbergen’s hand was forced when he came around Turn 10 on full opposite lock, a power steering failure causing fluid to drop over the rear tyres of the #97 car which smoked its way in to pit lane. Though he tried to rejoin the race, a mechanical black flag and assessment of the failure meant he was forced to retire.

With all the field’s pit stops completed, McLaughlin held a comfortable three-second gap over Waters who had checked out from Mostert’s sights as Whincup held down fourth place with the Erebus Motorsport car of Anton de Pasquale recovering well to circulate in fifth after a bad race start.

A haul of 100 points helps McLaughlin to extend his lead in the championship over Whincup who held on to fourth with only Waters and Mostert ahead of him. de Pasquale edged out Nick Percat as the Brad Jones Racing driver took seventh with Fabian Coulthard bringing the second DJR Team Penske car home in seventh.

A strong day for Tickford Racing was cemented with Jack Le Brocq and James Courtney finishing eighth and tenth respectively, sandwiching the Team 18 car of Scott Pye in ninth.

Both Shane van Gisbergen and David Reynolds were not classified, the Triple Eight and Erebus cars both suffering power steering failures around the Townsville street track.

Two more races are set to come tomorrow, qualifying starts at 0940 local with Race 23 for the championship starting at 1205.