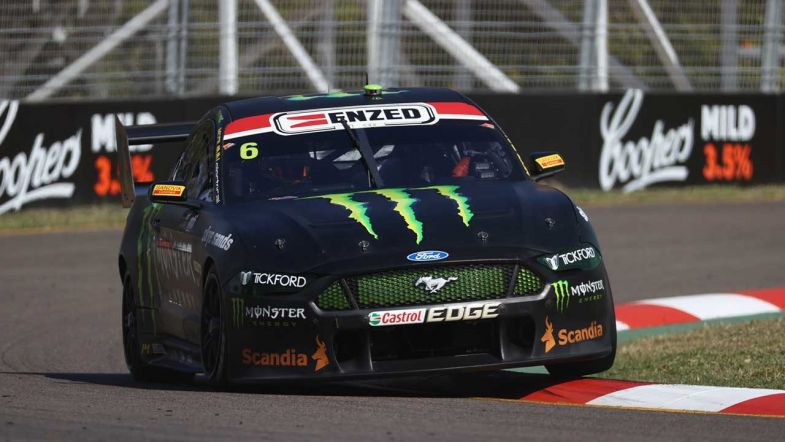 Townsville take two is off to a good start for the Tickford Racing camp as their drivers James Courtney and Cam Waters topped the Saturday practice sessions in the second weekend around the North Queensland circuit.

With the Supercars field back on track for the fourth straight weekend, Tickford’s engineering group took the week off to study last round’s data to put their cars at the top of the timesheets across the two 30 minute sessions.

It was Courtney who opened the account in the morning’s first outing, going for a late blast on a second set of tyres to set the benchmark for the rest of the field to chase after Chaz Mostert had led the order until the final minute, the Walkinshaw Andretti United driver getting demoted to fifth.

Second in the opening session was Shane van Gisbergen, getting on to the knife of his Triple Eight Holden to find the limits, ending up under a tenth away from Courtney with Mostert’s WAU team-mate Bryce Fullwood close behind, followed by Scott Pye for Team 18.

It was again a late blast which saw the Tickford machine of Waters jump to the top of the order in second practice, doing his run after the chequered flag had dropped to propel himself up to first place.

Though it was championship leader Scott McLaughlin who had led the way for most of the session, besting his own time in the final minutes, Waters’ time was good enough to topple the DJR Team Penske driver by just 0.0029 of a second.

Mostert was able to beat his opening practice time to get third in the second outing while Courtney secured fourth place despite suffering rear instability under braking across the two sessions.

Qualifying and the Top Ten Shootout for today’s opening race gets underway at 1245 local time with the race itself getting the green flag at 1540.