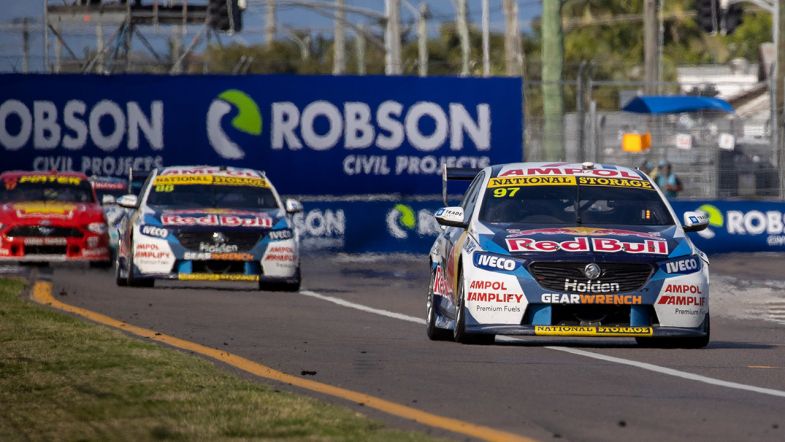 New Zealand’s two top Supercars drivers are at odds with each other after a late-race pass for the lead of the final race in this weekend’s Townsville SuperSprint.

Championship leader Scott McLaughlin and Shane van Gisbergen were fighting for the lead of the race in the closing laps after a late safety car, McLaughlin’s DJR Team Penske #17 running on much older Dunlop rubber than the Triple Eight car of van Gisbergen.

With van Gisbergen on the charge, he made a pass on McLaughlin but sat his countryman out wide while doing so in a MotoGP style block pass, allowing team-mate and McLaughlin’s championship rival Jamie Whincup through to second place for Triple Eight to score a one-two finish.

After the race, McLaughlin felt he was robbed of a battle with Whincup for the position and that it was too early in the championship race for van Gisbergen to start playing games.

“For me, I knew I didn’t have the pace for Shane, he had the fresher tyres and obviously the Safety Car at the end really hurt us,” said McLaughlin.

“I think we did an awesome job holding on that far, but I would have just loved to have a one-to-one battle with Jamie.

“In my eyes it would have been awesome. I get the team game, (but) I feel like it’s a bit early for those silly games.

“For me, whether I agree with that sportsmanship or not, that’s fair game. They’re a top team, they set a precedent, so let’s go.”

Returning serve in the post-race press conference, van Gisbergen was sharp and to the point when asked about McLaughlin’s comments by bringing up the “debris” incident from Bathurst last year which saw McLaughlin winning off the back of his team-mate Fabian Coulthard being told to back up the field.

“I don’t know about this stuff”, he said.

“We don’t need to bring up ‘debriss’ and stuff like that. I thought it was a fair pass on my part.”

Whincup too piled on, taking a swipe at DJR Team Penske for sitting second in the team’s championship despite McLaughlin leading the driver’s standings thanks to a tough 2020 campaign for team-mate Coulthard.

“I guess it just comes down to we run a two-car team, and there’s the same equipment (for) both cars (and) we’ve both got the same opportunity,” Whincup said of Triple Eight.

“It’s generally sometimes a negative because you’ve got to pit behind the second car or he takes points away from you but today, if anything, it was a help and that’s the advantage of running a two-car team instead of a one-plus-one.”

Whincup now sits 143 points behind McLaughlin in the driver’s standings while van Gisbergen holds down fifth place, gaining on the third and fourth placed drivers in Chaz Mostert and Cam Waters.