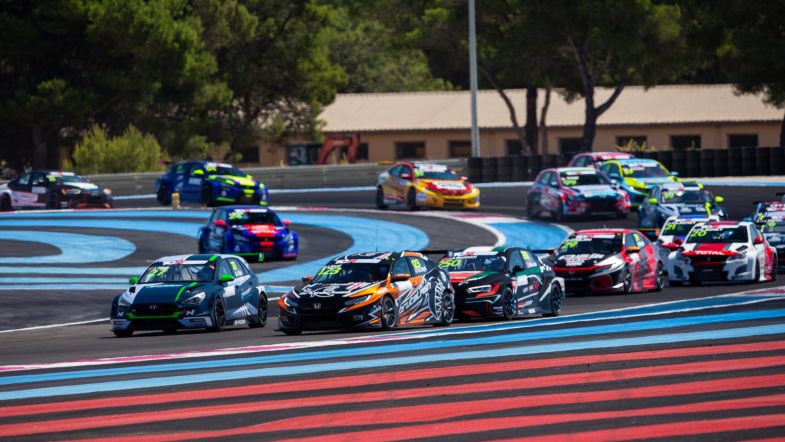 The second round of the TCR Europe Series takes place at Zolder this weekend, with the title battle set to step up another level at the Belgian circuit.

After the opening weekend of the 2020 season at Paul Ricard, just seven points separate the top four in the standings, with Brutal Fish Racing’s Dan Lloyd holding a slender advantage over Comtoyou Racing’s Mehdi Bennani.

Lloyd picked up valuable points in both qualifying and the races, with the revised qualifying points structure giving the Honda Civic Type-R driver eight points before racing got underway.

His victory in Saturday’s first race combined with sixth place in Race 2 left the British driver on 69 points, one clear of Bennani. The Moroccan finished a close second to Lloyd in the opening encounter before finishing ahead of the Brit in Race 2 with fifth.

Third in the standings heading into this weekend is Néstor Girolami on 66 points, although the Argentinian will be competing this weekend in WTCR, which races alongside the European series as its delayed season gets underway.

Girolami had been a late call-up in the PSS Racing Honda Civic Type-R for the opening round in France, standing in for regular driver Viktor Davidovski who was unable to attend due to travel restrictions around the COVID-19 coronavirus.

Another driver to enjoy a positive Paul Ricard weekend was Team Clairet Sport Peugeot’s Teddy Clairet, who currently lies fourth in the standings.

The younger of the Clairet brothers bagged a fourth and a third in the two races on home soil, utilising the straight-line speed of the Peugeot 308TCR to great advantage.

Compatriot John Filippi is fifth in the standings after something of a bittersweet weekend. The Frenchman, driving a Target Competition prepared Hyundai i30 N TCR, secured pole position on Saturday but was made to rue a poor start in Race 1 and had to settle for third.

Seventh in the second race was small recompense for the missed opportunity in the opener and leaves Filippi well within touching distance of the top of the table entering the Zolder weekend.

While the leading contenders enjoyed a positive first round of the year, others struggled. JSB Compétition’s Julien Briché, who finished second in the points to eventual champion Josh Files last season, will be looking for better fortunes at Zolder.

The Peugeot driver battled tyre management all weekend at Paul Ricard, with the final sector particularly challenging in finding the best lap-time. A pair of 14th place finishes were all that Briché could manage from the weekend, despite showing better form in the reversed-grid second race.

BRC Racing’s Dániel Nagy was another one to endure up-and-down fortunes at Paul Ricard. The Hungarian topped the first free practice session on Friday but could not quite match that performance come qualifying, ending up twelfth on the grid.

Nagy managed eleventh and tenth in the two races as a result and is currently 10th in the standings.

The weekend will start on Friday with free practice, with the first session scheduled for 14:10 CEST and the second for 16:20, both lasting 30 minutes. Qualifying will be held on Saturday at 11:10, with the usual Q1-Q2 format.

Race 1 takes place on Saturday afternoon, starting at 15:30 and lasting 25 minutes. The second race will start at 15:20 on Sunday.