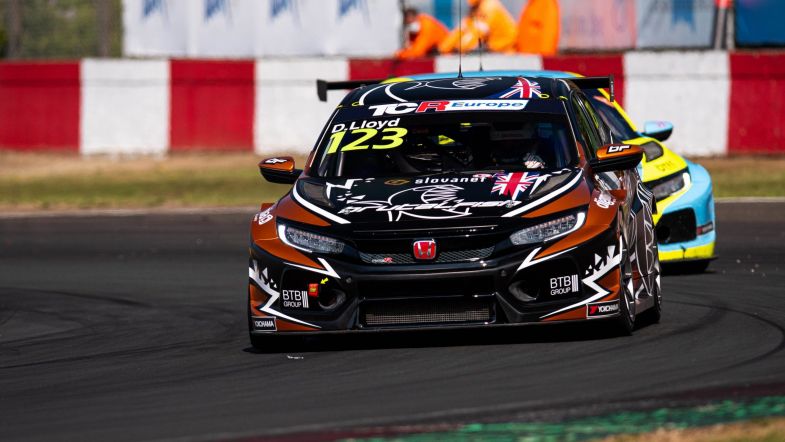 Brutal Fish Racing’s Dan Lloyd labelled the second TCR Europe series round of the season at Zolder as a “great weekend” after extending his lead in the points standings.

Despite being one of the heaviest cars coming into the Zolder weekend, Lloyd leaves the Belgian circuit with an increased points advantage heading to Monza, with Profi Car Team Halder’s Mike Halder nine points adrift.

Lloyd admitted to suffering from bad starts in both of the weekend’s races, but believes he and his team understand the issue ahead of the next round.

“It’s been a great weekend and we got some useful points here, so I’ve extended my lead in the championship while carrying the maximum ballast,” said Lloyd, who recorded a fifth and a second in the two races.

“My starts weren’t the best this weekend, but we think we know why – it has to do with the clutch, which will need some work, but we’re confident we can fix it.

“It was an awesome job by the Brutal Fish team to be carrying 60kg around Zolder, which is known for being hard on the brakes.”

The Hondas have been the most performant of all the brands in TCR Europe so far this season, taking three out of the four wins on offer.

Although Lloyd does not feel the Civic Type-R TCR will have an outright advantage at every circuit, the car’s all-round performance should be able to compete with the Audi RS 3 LMS, which the Brit reckons will pose an even bigger threat later in the year.

“To be honest, I don’t think the Honda will be the car to be on pole everywhere, but it’s one of the most consistent cars over the entire season.

“The Audi cars were strong here and they will be strong at Monza and Spa, but at least we’ll be going to Monza without so much weight.”

Losing out this weekend in the early title chase is Comtoyou Racing’s Mehdi Bennani in his Audi RS 3 LMS. The Moroccan failed to finish the opening race on Saturday but managed fifth place on Sunday to remain in touch, 29 points behind Lloyd in third.

Ten points further back is Teddy Clairet in the Team Clairet Sport Peugeot 308TCR. The Frenchman was again consistently in the points and a haul of 28 for the weekend leaves him in fourth in the standings.

Race 1 winner Nicolas Baert moves up to fifth in the points, just six behind Clairet while BRC Racing’s Dáni Nagy is two points back in sixth following what the Hungarian described as a “really hard weekend”.

“I’m mega-happy that my championship fight is back on track,” said Nagy.

“This weekend was really, really hard for all the Hyundai cars as the Honda and Audi cars were much faster than us.

“To finish on the podium is really, really nice and a bit unexpected. I made a good start and then I had some good luck as two cars ahead of me collided.

“I took a lot of risks, to be honest, so big thanks to the BRC Racing Team. It looks like we are heading in the right direction – there is a big fight between the two Hyundai teams.”