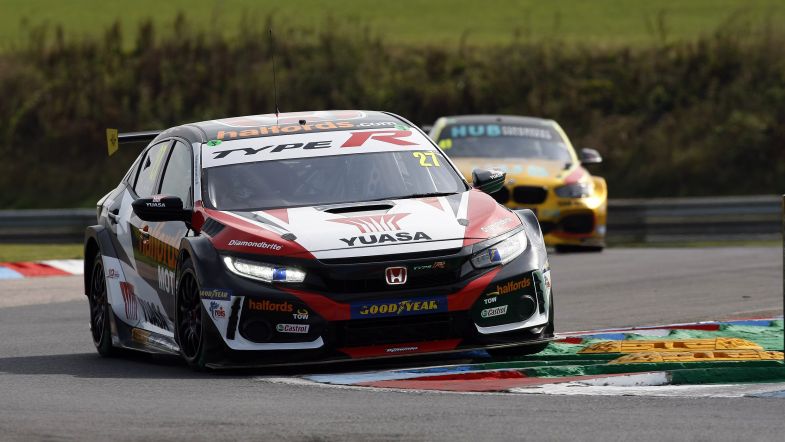 Dan Cammish completed a sweep of the Saturday sessions to snare his first pole of the BTCC season in qualifying at Thruxton.

The Team Dynamics driver had led the way in both free practice sessions and then improved to set his quickest time of the day in a hard-fought qualifying session that saw a number of cars going way quicker than they had done in practice.

Running out of sync with his rivals, Cammish rocketed to the front of the field with an impressive lap of 1:15.201 and then as in practice, was able to spend the final minutes out of the car watching on as his time remained unbeaten.

Things might have been different had it not been for an error from Tom Ingram on his quickest lap, with the Speedworks man taking a trip across the grass at Church en-route to the second fastest time; a lap that had seen him on provisional pole before Cammish’s record-breaking time.

Ingram would end up less than a tenth of a second off pole, with Matt Neal putting the second Dynamics Honda into third spot.

Adam Morgan was the only man to improve in the final minutes as he jumped into fourth spot ahead of his 250th start in the series in race one tomorrow, with Jake Hill and Rory Butcher rounding out the top six.

Points leader Colin Turkington qualified eighth quickest alongside Tom Chilton on row four with title rival Ash Sutton closer to the BMW than he had been in practice, but still with work to do from eleventh.

The top 15 drivers would be covered by less than a second, with series returnees Rob Austin and Tom Onslow-Cole outside that marker in 16th and 24th on the grid.