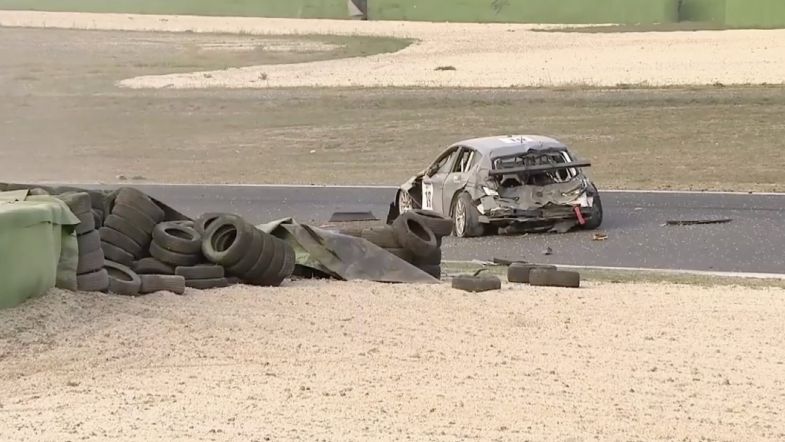 Eric Brigliadori won the first TCR Italy championship race of the weekend at Vallelunga that was red flagged due to a massive crash by Eric Scalvini.

BF Motorsport driver Brigliadori started from pole position and made strong start, keeping the lead until the crash.

The positions directly behind him remained static bar Cupra driver Salvatore Tavano who was able to get past Hyundai driver Felici Jelmini on the first lap for third position behind Honda driver Alessandro Giardelli.

Scalvini went off into the barriers at high speed with ten minutes left of the race, seemingly without contact. The Cupra driver went backwards in the barriers, with severe damage to the rear end of his Cupra TCR.

The Italian escaped the incident unharmed, walking out of the car unaided.

The crash saw Francesca Raffaele taking spectacular evasive action in her Audi RS 3 LMS, going over the grass and was almost collected by Hyundai driver Mauro Guastamacchia when rejoining the track.

The incident saw the safety car coming on track and circulating for a couple of laps before the race was red flagged due to the barrier damage.

Brigliadori crossed the line in first position ahead of Giardelli and Tavano.

Marco Pellegrini finished sixth behind the wheel of his Hyundai i30 N TCR ahead of manufacturer colleague Igor Stefanovski and Honda driver Max Mugelli.

The second race of the weekend starts at 16:35 CEST tomorrow.