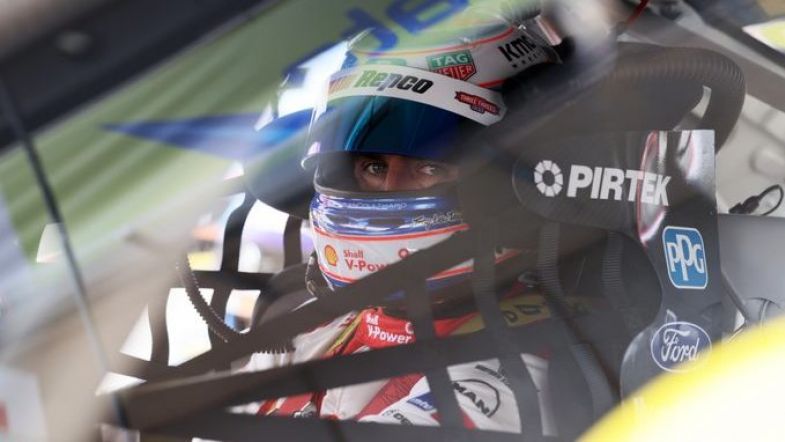 DJR Team Penske’s Fabian Coulthard has notched up his first win since Perth last season after a hectic second half of the opening race at The Bend Motorsport Park this afternoon.

Waiting 41 races for a win and racing in his 200th round start, Coulthard converted a fifth place on the grid to the victory as his rivals fell by the wayside, keeping a cool head throughout the 24 laps to be in the right place at the right time.

Polesitter Chaz Mostert got off to a bad start, getting too much wheelspin off the line which dropped the #25 Walkinshaw Andretti United car to fourth through the opening lap as championship leader Scott McLaughlin took the lead with a holeshot in his DJR Team Penske machine.

The Kiwi dragged title rival Jamie Whincup with him on the run to Turn 1 and the Triple Eight car hung on to the back of McLaughlin’s throughout the opening lap, applying maximum pressure until the penultimate corner where they made contact, both ending up off the road and dropping a handful of spots.

Whincup tried to make a move up the inside, locked the rear brakes and made side-to-side contact with McLaughlin, earning himself a 15 second penalty which he served in his pit stop, dropping down to the back of the pack.

Up front, it was Shane van Gisbergen who took the lead for Triple Eight, stretching a healthy margin in the opening laps before his pit stop where he emerged just ahead of Jack Le Brocq, up to effective second on the road after qualifying in seventh.

As the race wore on, van Gisbergen started to struggle with rear tyre grip, allowing Le Brocq and Fabian Coulthard’s DJRTP car behind him to close up and challenge for the race lead with under 10 laps to run.

As Le Brocq made his move at the penultimate corner, he got by but van Gisbergen was able to get back up the inside for the final turn, pushing Le Brocq wide which allowed Coulthard to take second off the Tickford pilot while van Gisbergen retained the lead.

With three laps to run, van Gisbergen led a slow train of cars from Coulthard, the Tickford cars of Le Brocq and Holdsworth, McLaughlin, all vying for the race win as the leader got his elbows out to defend the top spot.

Le Brocq was able to get back to second after sending himself past Coulthard, allowing himself to get back in contention for the win but van Gisbergen forced him wide again, letting Coulthard past for the race win as Le Brocq got through to second.

In the battle for fourth, McLaughlin made an attempt at a pass on Holdsworth, tagging the rear of his Tickford car which spun the latter, allowing him to move to fourth on the road which soon became third when van Gisbergen started to drop back through the pack but he was given a 15 second penalty for the incident.

On the final lap, Le Brocq was able to get right on the back of Coulthard and apply pressure to the Kiwi but he was unable to get past, allowing Coulthard to take the win in his 200th round start.

Bryce Fullwood was able to take his first ever Supercars podium for WAU as a rookie after McLaughlin’s penalty was applied, just edging out the Kelly Racing car of Andre Heimgartner and a hard charging Cam Waters who put the Tickford #6 in the top five.

After leading a majority of the race, van Gisbergen’s tyre woes dropped him to ninth while his team-mate Whincup could only manage 19th. McLaughlin’s post-race penalty relegated the championship leader down to 15th, still four spots ahead of his championship rival Whincup.