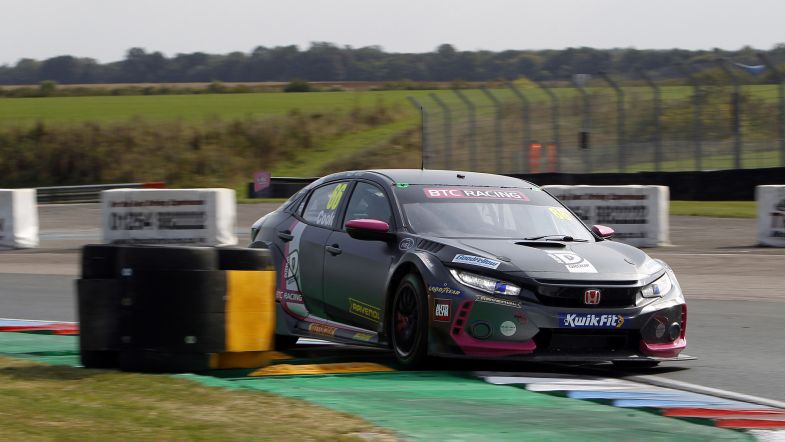 Josh Cook headed a 1-2 finish for BTC Racing in the final race of the weekend at Thruxton – securing his first victory of the 2020 BTCC season in the process.

The reverse grid draw put Cook’s Honda on pole position and he was able to maitain his advantage at the head of the field when the lights went out at start ahead of team-mate Tom Chilton, with Rory Butcher slotting into third and Tom Oliphant into fourth.

Double winner Tom Ingram was away well despite the additional weight on his Toyota Corolla and ended up sixth after the opening lap behind Ash Sutton’s Infiniti.

The two Hondas quickly started to edge away from Butcher at the front, with the Motorbase Ford also gapping Oliphant behind as he had his mirrors full of Sutton’s Infiniti.

The points leader was able to make a move at Seagrave on lap five to sweep ahead, with Ingram following him through – and the pair then set off to chase down Butcher ahead.

Further back, defending champion Colin Turkington had managed to climb up from 13th on the grid into the top ten on the opening lap and came out on top of a battle with Dan Cammish to leave him running in ninth spot – with the Hondas of Matt Neal and Michael Crees ahead.

As the race reached the half-way point, Sutton had closed onto the rear of Butcher’s Focus but the Scot was placing his car in the ideal position to keep the former series champion at bay, with Ingram lurking close behind in the Toyota.

Butcher made a mistake at the chicane at the end of the eleventh lap but was able to defend as the trio then streamed into Allard and Sutton then almost nosed up the inside at Goodwood before being forced to defend to keep Ingram at bay.

That provided Butcher with some breathing space but heading into the final two laps, the three cars were still locked together in the fight for third.

Out front however, Cook was looking increasingly safe in the lead having managed to edge two seconds clear of Chilton in search of his first win of the year.

Cook duly wrapped up victory for the third straight Thruxton meeting ahead of Chilton in a BTC Racing one-two, with the battle for third going down to the wire.

Sutton made his move going into the complex only for brief contact with Butcher to unsettle the Infiniti enough to allow Ingram to try and make a move on the Laser Tools Racing man.

Sutton held firm to keep hold of the place but it gave Butcher the space to secure his place on the podium, with Sutton having to settle for fourth from Ingram and Oliphant.

Neal capped a solid weekend with seventh place ahead of Turkington, who spent much of the race stuck behind Crees before finally making a move just a matter of laps from the finish.

Jake Hill and Cammish rounded out the top ten after Crees slowed with a puncture on the final lap and dropped down outside the top 20.