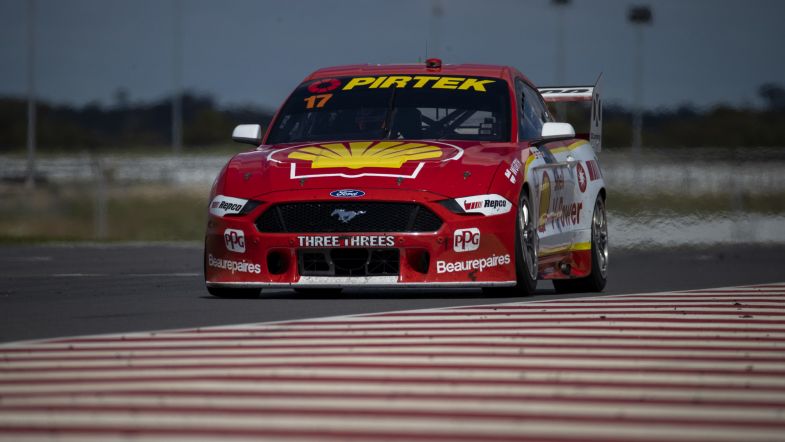 Pole to victory for Scott McLaughlin in closer at The Bend

A near faultless lights-to-flag victory has let Supercars championship leader Scott McLaughlin put one hand on the trophy as the DJR Team Penske driver controlled the third and final race of the weekend at The Bend Motorsport Park.

After going quickest in qualifying to take his 73rd career pole position, the championship leader converted perfectly off the line to control the race from the front of the pack, not coming under any pressure throughout the 24 lap outing to take another 100 points towards his title aspirations.

McLaughlin’s start was borderline on being a jump, leaving the line a fraction of a second after the lights went out and dragging team-mate Fabian Coulthard to the front with him as the DJR Team Penske cars led the way on the first lap.

At Turn 16 on the opening tour, a feisty battle for fourth between Kiwis Shane van Gisbergen and Andre Heimgartner resulted in the latter’s Kelly Racing entry being spun off the road, earning van Gisbergen and the Triple Eight team a 15 second penalty.

With the chasing pack having to check up, contact was made between the Tickford Racing car of Jack Le Brocq and Erebus Motorsport’s David Reynolds, ending up in Mark Winterbottom becoming the innocent bystander and collecting James Courtney’s Tickford car on the way through, taking both out of the race.

Coulthard was the first driver up the front to pit, taking his stop on lap 10 as behind him the two Triple Eight cars of Jamie Whincup and van Gisbergen started to pounce on a struggling Chaz Mostert, the Walkinshaw Andretti United driver struggling on worn out rubber and having to relinquish two spots in just as many laps.

McLaughlin stopped next two laps later, having an easy stop after gaining a comfortable lead in his opening stint to rejoin the track in clear air and well ahead of Whincup when the Triple Eight driver came in for his stop, rejoining behind Coulthard and the Erebus car of Anton de Pasquale.

Team 18’s Scott Pye continued his form of charging through the pack in the race, getting past van Gisbergen who was also suffering tyre woes, deciding to pit and serve his penalty on lap 16, dropping outside the top 15 thanks to the 15 second hold in his pit bay.

McLaughlin continued to control out front with Coulthard behind as Whincup shadowed de Pasquale, making a move for third but tagging the back of the Erebus, slowing both up and choosing to redress the spot before the battle resumed, eventually making a clean pass to take the final spot on the podium.

The podium spots remained the same and de Pasquale came home a comfortable fourth ahead of Cam Waters as the top Tickford car, edging out Pye and the Kelly Racing pair of Heimgartner and Rick Kelly as Reynolds and Brad Jones Racing’s Todd Hazelwood rounded out the top ten.

After the lap one incident and subsequent penalty, van Gisbergen could only muster 14th while Mostert’s tyre troubles dropped the WAU car to 16th, well down from qualifying on the front row of the grid.

Next round will again be at The Bend at the same time next weekend, acting as the penultimate round of the series before the finale at the Bathurst 1000.